Easter across the Connexion 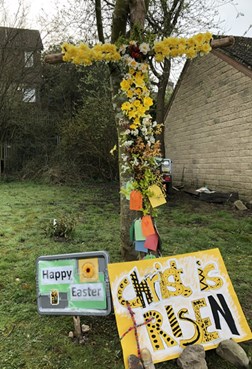 Living on a small estate of 42 houses in Rowsley, in the Peak Circuit presented the challenge of how we could share the Easter good news of God’s love for all, in this unprecedented time. To put up a cross in the centre of the estate for Holy week was very much the heart of the decision. Made from a tree washed down the river in the recent floods here in Rowsley, it was erected on Palm Sunday, with thorns gathered from the riverbank that formed the crown that adorned the cross. A leaflet was delivered to every house explaining its significance for Holy week, but also as a sign of hope for this present day and time.

An invitation was given to use the colourful labels to share a message, write a prayer, remember a love one, or draw and Easter picture. These grew as the week progressed, but so did so many conversations with neighbours and many questions …..“I’ve seen the cross – what’s it all about?” People stood and looked, painted eggs were brought to the foot of the cross, a small colourful twig cross bound in wool, and remembrances of loved ones were written.

The cross was transformed in the early hours of Easter Day with flowers and more messages appeared. The proclamation “Christ is Risen” was a sign of hope that much more will be done in the days that lie ahead as new relationships and friendships are developed.

To God be the glory!! 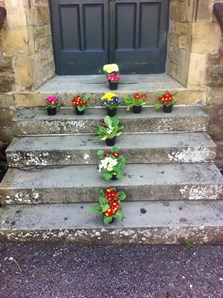 The challenge of how to be church in these times has brought about a movement of God’s Holy Spirit that is such a blessing as we see God at work through his people, and hear of how he has poured out the Spirit when people have had the courage to step out in faith. The decision to close churches set one small congregation in the Peak Circuit thinking about how to celebrate Holy week and Easter and be the good news in the community.

The chapel in Litton stands near one end of the village green with its own small garden. Prayers were made as to how we could make an impact outside the church building.  The idea of playing the Wesley hymn “Christ the Lord is Risen today” outside was suggested (in fact – long before any other bodies had suggested this). It seemed a fantastic idea, but with not much technology behind them in the small congregation, the idea seemed as if it may fail until a friend in the village said: ‘You can use my Rock band PA system. I’ll play your chosen version through that.’

The rousing ‘John JP Patterson’ version with a fanfare was chosen, and through the grapevine the village were informed this would happen at 10.30am on Easter Day – but please don’t leave your doorsteps or gardens, bearing in mind social distancing.

Holy week began with Palm crosses being placed on a table outside the chapel garden for villagers and passers-by to take one, and many were taken.  On Maundy Thursday the wooden cross was erected by two chapel members only, a married couple. On Friday it was draped with the purple robe and crown of thorns. On the steps of the chapel another great attractive visual - a tiered cross was formed of flowers. Posies of flowers were made by the congregation ready for Easter Day, to be free to take as a gift and a blessing for anyone passing by the chapel, with a rainbow notice to attract.

On Easter Day there was a sense of excitement as the cross was adorned with an orb of yellow flowers, and in the centre a notice saying: ‘Christ is Alive’. “Christ the Lord is Risen today”, in this spectacular version, was played to the village and enthusiastically applauded by the residents all around the village green.  It was heard from one end to the other and estimated at least 50 people stood and worshipped on their doorsteps. Two cyclists and a car or two stopped to listen.  The amazing words of “In Christ alone” were played next to more applause and the friend  from the Rock band  put on finally: “Lean on me” – what an inspired choice – the words just fitted and was applauded by all the village. Emails of thanks and encouragement came to say – what an inspired choice of songs! Can we do it next year?  and another – can we do this every Sunday!? 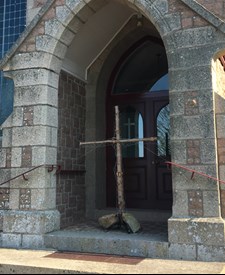 Our Leadership Team gave some thought of how we would celebrate Easter during this national emergency with all churches closed.
So an EB. Team effort & social distancing !.

The cross was put in our church porch for first time ever on a Good Friday. Ebenezer Church is located on a very busy main road in Jersey, so lots of passing traffic! 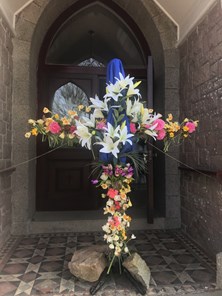 Our cross was then decorated as usual for Easter. And in this crisis shining out with light, love & hope for this Easter message.

Flowers were  a bit scarce due to dry weather & 'lockdown' !