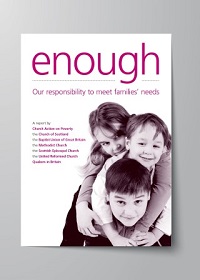 Major UK Churches are warning that the Government's Welfare Reform and Work Bill marks a dangerous shift away from a core principle of the Welfare State and will make poor people even poorer.

A YouGov survey commissioned by the Churches has also revealed that 61% of UK adults believe that welfare benefits should be set at a level that allows families with children to cover their basic costs. In contrast, only 25% of those polled said they thought that benefits should be set deliberately low to encourage families to find work or get more work.

The Churches'  report reveals that the Benefit Cap, which reduces families' benefits by an average of over £3,500 per year, has only resulted in 4.7% of families finding work. However, 46% of families affected by the Cap experienced increasing problems with rent arrears. This is despite the Government's claims that reducing the amount of benefits people are entitled to is an effective way of moving people into work.

"No child should be left without enough in order to motivate their parents," said Paul Morrison, Public Issues Policy Adviser for the Methodist Church and author of the report. "If children live in a family which doesn't have enough money they are more likely to die young, do worse at school, and experience worse health. Many of these families are already in work and working very hard. Any policy that claims that taking £1,000 from a family will enhance the life-chances of its children, as the Bill does, is not only supremely questionable but morally flawed."

The report, entitled "Enough: Our responsibility to meet families' needs", has been published by the Baptist Union, Church Action on Poverty, the Church of Scotland, the Methodist Church, Quakers in Britain, the Scottish Episcopal Church and the United Reformed Church, who together represent more than 840,000 people in Britain.

It highlights how the Bill threatens to undermine a founding principle of the welfare state: namely, that the amount families receive in benefits should be sufficient to meet their basic needs. The Churches say the Bill will break the link between what people need and the amount of support they can receive. Families with children will be hardest hit by this change.

"Fairness to the taxpayer should not be achieved at the expense of unfairness to children," Mr Morrison continued. "As Christians we believe all people are made in God's image. We do not believe that we should ever deliberately deprive a person, a family, a child of enough to thrive or to fulfill their God-given potential. We are asking that the welfare state holds to its founding principles, and seeks to provide enough so that every child can have the best chance in life."

People will soon be able to find out how different groups will be affected by the Welfare Reform and Work Bill online here. The Churches are asking people to pray, to read and share the report and write to their MPs.