Black Country man who helped shape America to be celebrated 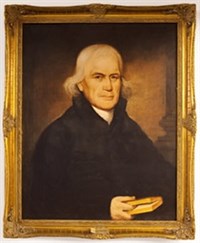 A man from the Black Country who helped shape America is to be celebrated this April with a day of special events in Tipton on Saturday, 9th April.

Francis Asbury was a humble metal worker and lay preacher when, in 1771, the founder of the Methodist Church John Wesley called for men to become preachers in the soon to be independent America.

Asbury answered the call and became America's first Methodist Joint Superintendent along with the Revd Dr Thomas Coke. Asbury's passion and determination meant that Methodism became important in the founding of the young country.

This year is the 200th anniversary of Asbury's death and to mark his life, there will be a day of events held around the area he lived on Saturday 9th April.

At the Black Country Living Museum, dignitaries from the Methodist Church in the UK and America will be remembering Asbury with a day of fun and events. A special service will be held in the Museum's Darby Hand Chapel where there will also be an exhibition of Asbury's life, themed story tellers and a costumed choir.

Talks will be given by historians and members of the Church in the UK and America to discuss the importance of Francis Asbury and his life. In nearby Great Barr, the small eighteenth century cottage where Asbury spent his childhood will the open for tours with a heritage bus service run between the two sites.

"Asbury travelled thousands of miles in America each year. Under his direction, the church grew from 1,200 to 214,000 members. Among the men he ordained was Richard Allen in Philadelphia, the first black minister in the United States," said Jo Hibbard, the Methodist Church's Director of Engagement.

She continued: "Asbury shaped more than religion in the United States. His work helped shaped the nation itself. The values that he taught continue to influence American society. There are now more than 7 million Methodists in the USA and over 80 million worldwide.

"The man is revered in the US and we are delighted that a number of delegates will be joining us from America for the event to remember his work."

For further information on plans for the Family Fun Day on April 9, 2016, and how you can get involved, visit the Methodist Heritage website www.methodistheritage.org.uk.