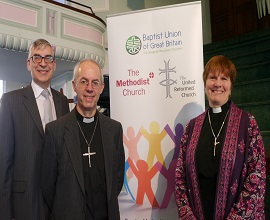 Delivering a keynote address to nearly 400 people at the Love your neighbour: Think, Pray, Vote conference, Justin Welby, Archbishop of Canterbury, has urged Christians to resist political narratives that appeal to self interest and vote for the common good. In his thoughtful speech, Archbishop Justin said: "It's impossible to love Jesus Christ and not to care about the welfare of people in every respect."

The Archbishop went on to appeal for us to be positive and avoid 'miserablism', arguing that it is imperative for all to exercise their vote - for political activity is the only way to achieve the type of society that we say we want, saying: "If we don't vote we share responsibility for the apathy and cynicism in our politics."

The Conference has been organised by the Joint Public Issues Team, which combines the expertise of the Baptist Union, the Methodist Church and the United Reformed Church in the area of public issues.

Mr John Ellis, Moderator of the General Assembly of the United Reformed Church commented: "Archbishop Justin showed how we should view politics through a lens of the Gospel: If we did that we would never succumb to apathy or the temptation to demonise individuals or political parties - instead we would honour the positive and support all those seeking the common good. So, as Christians we stay hopeful, with a stronger motivation to use the political process to fight injustices."

The busy programme included a lively Q&A session immediately after the Archbishop's speech, reflective worship and a closing keynote speech from the Revd Ruth Gee, former President of the Methodist Conference, which built on the core messages of the day: Think, pray, vote - and act. Delegates also had the opportunity to attend workshops on poverty, communications, building a relationship with your MP, grounding politics in faith, immigration, climate change, preaching and praying social justice and peacemaking.

Rachel Lampard, Joint Public Issues Team Leader, said: "It's been a wonderfully thought provoking and challenging day. I hope that people will go home excited, enthused and strengthened in their commitment to think, pray and vote. To tell Christians that they should not be involved in the political life of this nation is to tell them to stop being followers of Jesus Christ who has told us to love God and to love our neighbours."

The Conference also saw the launch of the Love Your Neighbour: Think, Pray, Vote Election pack, produced by the Joint Public Issues Team together with the Church of Scotland. The pack explores four themes for the election - Truth, Justice, Peace and Wellbeing - through short films, postcards, prayers and Bible Studies and is designed for use in churches and small groups in the four weeks immediately before the General Election in May.

Commending the resources, the Revd Phil Jump, Regional Minister of the North Western Baptist Association and member of the Joint Public Issues Team, said: "Our hope and vision is that every member of our churches will enter the polling booth on Election Day, conscious that above everything else, they are called to be followers of Jesus."

The resource pack is available from Methodist Publishing here.

Podcasts of the keynote speeches, together with other news from the Love your neighbour: Think, Pray, Vote conference will be available here.