Director of Girls' Brigade to step down 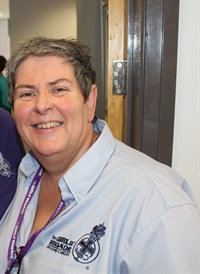 The Director of Girls' Brigade Ministries and Girls' Brigade (GB) England & Wales, Ruth Gilson, has announced that she'll be stepping down from her role at the end of August 2017 - to prepare for ordained ministry in the Methodist Church.

Ms Gilson gave the announcement at the GB England & Wales spring conference in Bedford on Saturday (4 March), following more than 17 years of faithful service as the organisation's Director.

Speaking of her decision, Ruth said: "Recognising times and seasons is important in leadership and a key to forward movement in the mission of a Christian movement. I feel hugely privileged to have been involved in the GB story so far - and am stepping down now, as the time is right! GB forms a bedrock of faith discovery for generations of women. It's enabled hundreds of thousands of girls to live as confident women in today's world, and I was called to be part of a season of re-imagining this mission for the future.

"Over the past number of years the GB trustees, volunteers and staff team have grappled, with real integrity, over challenging issues of change and development. We've done this to ensure that GB is clear in our sense of vision as a movement and is shaped in such a way that enables us to move forward effectively as a 21st century mission of church. I've loved being part of this unfolding story of God's calling on GB for a new generation.

"In 2018 GB celebrates 125 years of Christian mission among girls. I believe our #WeAreGB125 initiative will be a catalyst for significant growth in the church's connection with girls and young women of this generation, contributing to the HOPE 2018 vision to see the church in the UK grow by 10%. It's hugely exciting to see how God is positioning GB for this, and I know this new season will require fresh skills, gifts and resources as we move forward. Stepping aside now is all part of this story, and I'm looking forward to cheering GB on from the side in the days ahead!"

Amanda Allchorn, Chairman of GB Ministries (GBM), and Jules Murdy, Chairman of GB England & Wales (GBEW), said: "GB has a huge debt of gratitude for the way Ruth has led GB forward since 2000. She has been a visionary leader, sacrificial woman of God, and she'll be greatly missed. Many will know that Ruth is already preparing for ordained ministry in the Methodist Church. It's an exciting new calling and we know she'll bless many.

"During the next few months the GBEW and GBM Boards will be working together, to create and advertise a new role for an interim GB director - work is well under way on this. Finally... GB's staff team and trustees wish Ruth well as she moves on in her ministry. She'll be in our prayers and hearts for many years to come."