East Africa food crisis: A catastrophe of this magnitude means that every response matters 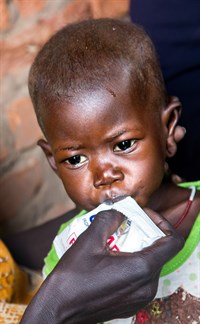 More than 10 million people in East Africa and Yemen are facing starvation and famine: "Without collective and coordinated global efforts, people will simply starve to death. Many more will suffer and die from disease,"said Stephen O'Brien, UN Humanitarian chief at a meeting of the UN Security Council last Friday.

All We Can and the World Church Relationships Team of the Methodist Church in Britain are urgently calling for individual and local community support to respond to famine in South Sudan and to avert famine and further death in other countries across East Africa and the wider region including Somalia and Yemen.

Ongoing food crises have pushed many countries to the brink of catastrophe with millions facing malnutrition, illness and death. A month ago it was announced that South Sudan had already reached a tipping point with two counties being declared as officially affected by famine. Since then, Somalia, northern Nigeria and Yemen have been categorised as being on the brink of famine, with other countries such as Kenya, Ethiopia, Burundi and Uganda facing severe food insecurity.

"We stand at a critical point in history. Already at the beginning of the year we are facing the largest humanitarian crisis since the creation of the United Nations," reported UN humanitarian chief Stephen O'Brien.

The Methodist Church in Britain is urging people to respond quickly, generously and collectively to thiscatastrophic situation by supporting the appeal being managed by All We Can.

Graeme Hodge, Deputy CEO of All We Can stated, "The acts of compassion expressed in the individual donations of many UK citizens and the collective fundraising efforts by community and church groups around the UK are nothing short of inspiring. Every day, we hear more stories of people who are responding to the desperate need of their fellow human beings, our global neighbours. We need this collective response to continue and grow to prevent the deaths of millions of children and their families. We need to ensure people across East Africa get the support they need to survive and recover. If you think that your individual response will not make a difference, think again. A catastrophe of this magnitude means that every response matters."

In 2011, Somalia faced a famine that led to over 260,000 people losing their lives. All We Can is responding to the dire circumstances across the region, starting with South Sudan, Somalia, Burundi, Ethiopia and Yemen in alliance with its experienced humanitarian aid partners working locally in each country.

All We Can's Humanitarian Aid Manager Jason Snuggs said, "This situation is incredibly serious, it is not one we can ignore. We need supporters to give generously and without delay, as we respond to the needs in this vast region and help towards averting famine in other countries across East Africa on the verge of disaster."

Gifts to this emergency appeal will enable All We Can and its partners to respond quickly to those in greatest need across the region.

To support the East Africa Famine Appeal go to www.allwecan.org.uk/famine