Giving thanks for the life of the Revd Elizabeth Clark 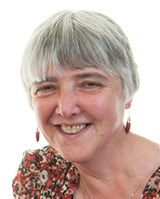 We are very sad to announce the unexpected death of the Reverend Elizabeth Clark, Methodist presbyter and National Rural Officer for both the United Reformed Church and the Methodist Church, 2014-2021.

The Revd Trey Hall, Director of Evangelism and Growth for the Methodist Church, said:

"Elizabeth was a wonderful colleague, a passionate advocate for rural contexts and people, and just an altogether warm and generous human being.

“We will remember her open-hearted faith, her deep kindness and pastoral heart, her unswerving commitment to justice, and her love of baking – especially her delicious Bara Brith."

During her time as National Rural Officer Elizabeth worked closely with ecumenical colleagues at the Arthur Rank Centre, a charity equipping rural Christians, churches and communities for mission and ministry. Prior to this role, Elizabeth served as a minister in Yorkshire: in the Ripon Circuit from 1999-2006, the Thirsk and Northallerton Circuit (2006-2011), the Sherburne Circuit (2011-2014), and also as a Rural Officer in the (then) York and Hull District.

Since her retirement in the summer of 2021, Elizabeth was a much-loved and respected supernumerary in the Airedale Circuit.

Before offering for presbyteral ministry, Elizabeth trained and served as a nurse.

The Revd Dr Richard Teal, President of the Methodist Conference in 2020-2021, said:

“I knew Elizabeth Clark throughout her ministry. I had the privilege to preach at her Ordinands Testimony service. Elizabeth came from the city into rural Methodism and was captivated by it, became an advocate for it and indeed never left it.

“Throughout her ministry she countered the myths about the countryside revealed in the paintings of Constable and Reynolds and by poets such as Tennyson: a beautiful landscape with unchanging villages and hamlets and a few farmers. A place where nothing much happens and communities are close-knit and united. This rural idyll has never existed and it certainly doesn't today. Elizabeth immersed herself in the reality of rural life and acknowledged the challenges particularly of isolation and poverty. This invaluable insight and her deep understanding of the rural scene is more fully expressed in the rural workbook, 'A Discipling Presence', which she instigated and a number of us were privileged to form a team with Elizabeth to compile.

“Her role as the Rural Officer for both the Methodist and URC Churches gave her a strong rural voice into the two denominations, but her influence was even wider. When I was President of the Conference and used the rural church and community as a major theme, Elizabeth alongside her colleagues at the Arthur Rank Centre, played a very supportive role for me for which I am extremely thankful.

“Elizabeth's sudden passing away is a huge shock and the Church has lost a very valued supporter of the countryside and many other people have lost a very dear friend and supportive colleague.”

Sarah Hulme, Rural Mission and Ministries Officer for the Methodist Church, said: "I truly appreciated Elizabeth’s wisdom and pastoral care as she generously mentored me into a new role, passing on her passion for all things rural."

“Elizabeth was a long time personal friend and colleague, working together in North Yorkshire Coast Circuit, and renewing both our friendship and colleagueship in Airedale. In these recent months Elizabeth had been a tremendous support to me in ministry. She also had some wonderful missional plans which she was working on with my full encouragement. Her loss to her church and circuit will be enormous. Her loss to her family is immeasurable. But God will carry us all through this shocking time in a peace beyond understanding.”

We hold in our prayers Elizabeth's husband, daughter, sons, friends, and all who love her and mourn her death. We join them in giving thanks to God for Elizabeth's life and ministry. May she rest in peace and rise in glory.