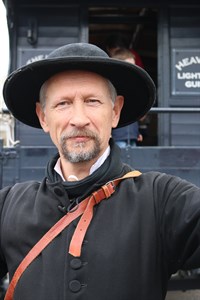 Hundreds of people attended a day of special events at the Black County Living Museum, Dudley, on Saturday 9 April to celebrate the 200th Anniversary of the death of a local man who helped shape modern America, Bishop Francis Asbury.

A day of costumed choirs, special services and talks were held at the museum, attended by hundreds of Methodists from across the UK in addition to the museum's regular visitors.

Also present were special guests from the United Methodist Church in America, where Asbury is revered as one of those who helped define the nation.

A humble metal worker from the Black Country who became an itinerant Methodist minister, Asbury answered a request by John Wesley, one of the founders of the Methodist Church, for preachers to serve in America.

Asbury's passion and determination meant that Methodism survived the American War of Independence and become an important part of the founding of the young country.

A variety of celebrations were held in Asbury's honour at the Black Country Museum, including:

The Revd Fred Day commented: "This has been a wonderful and exciting day for us. Asbury is not as well-known as he should be given how important he is to US history. He travelled around 270,000 miles on horseback, telling people about faith, and was even a friend to George Washington."

Jo Hibbard, the Methodist Church in Britain's Director of Engagement, added: "The day was a great mixture of fun and history, with a lot of us discovering how one man from the Black Country influenced, what went on to become, one of most powerful nations on earth."

The day was covered locally and nationally by media outlets including:
The Express & Star
Premier Christian Radio
BBC Radio 4 (from 29:54)
Ekklesia