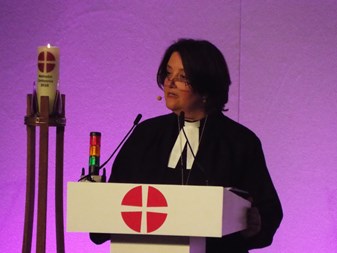 The Revd Michaela A Youngson has been elected and inducted
as the new President of the Methodist Conference, taking over from the Revd Loraine N Mellor. The induction took place on Saturday 30 June.

It is the first time in the history of the Methodist Church that a woman has been elected to succeed a woman President. During the ceremony, the new President receives a Bible that was used by John Wesley.

During his lifetime John Wesley chaired the Methodist Conference but after his death the Conference determined to elect a President annually.

Michaela was ordained in 1997 and is one of the Chairs of the London District. She is a regular contributor to Pause for Thought on BBC Radio Two, Chair of Trustees for Methodist Central Hall, a trustee of Making Herstory and a trustee of Southlands College.

Having chosen ‘radical grace’ as her theme for the year, Michaela is looking forward to helping the Methodist Church consider the radical nature of God’s grace and the ethic of hospitality and love-centred mission that flows from that grace.

During her Presidential address, Michaela commented: “God’s grace is radical. It goes beyond what is only fair, to a prodigious reckless generosity. It is prevenient grace, which flows from the Lover’s desire to see the beloved flourish, to be whole and to live in delight.

“We need to let go of our tendency to ‘niceness’ and, prompted by just how uncomfortable God’s grace is, make a nuisance of ourselves again in the market place and in the public square, refusing to remain silent in the face of systems that reinforce injustice, and oppress vulnerable people.”