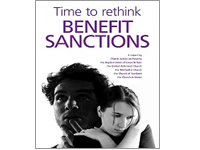 A shocking new report by a group of Christian churches shows that people with poor mental health are bearing the brunt of one of the Westminster Government's policies aimed at getting people back to work. The Welsh Data Supplement to the report Time to rethink Benefit Sanctions will be launched in the churches' tent at the National Eisteddfod in Meifod on Wednesday 5th August at 1pm. The event will hear the stories of some of those who have suffered from sanctions.

Benefit claimants who fail to keep appointments or fulfil their other conditions can be sanctioned, losing all benefit for periods of weeks or months at a time. The Welsh Data Supplement shows that two-thirds of those sanctioned in Wales are unfit for work because of mental health problems - more than in the rest of the UK. It is likely that the sanctions add to the worry and stress which already cause such difficulty for these people.

In his Preface to the report, Archbishop of Wales, the Most Revd Dr Barry Morgan says, "The results are shocking: large numbers of people, particularly those judged unfit for work due to mental health problems, are being punished ... by the withholding of their income."

Chair of Synod Cymru of the Methodist Church, Revd Jennifer Hurd, said, "Over a third of those who are told they may be sanctioned in fact find their sanction is cancelled because of a bureaucratic error. But in the meantime, they will have suffered additional unnecessary stress and anxiety, waiting to find out if their support is to be cut off."

Moderator of the United Reformed Church in Wales, Revd Simon Walkling, said, "This is a shocking report, and confirms what churches find in their work on the ground with Foodbanks, debt counselling services and other projects helping those in need in their communities. That is why our churches have said that in Wales, as in the rest of the UK, it is time to rethink benefit sanctions"