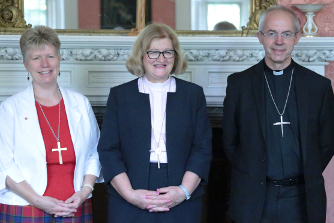 The President and Vice-President of the Methodist Conference visited Lambeth Palace on Friday (14th July) for a meeting with the Archbishop of Canterbury.

Accompanied by senior figures from both churches, the President, the Revd Loraine N Mellor, and the Vice-President, Jill Baker, met Archbishop Justin Welby to discuss matters of mutual concern and were encouraged by reports of Anglicans and Methodists working together in mission, evangelism, witness and service all over England.
Their wide-ranging discussions also took in the future of Europe, prayer, evangelism and witness, and the churches' engagement with political and public issues.
The President, Vice-President and the Archbishop commended the report 'Mission and Ministry in Covenant' to both churches for study and reflection together. This report sets out a proposal for a full relationship of communion between the two churches and a reconciled ordained ministry. The proposal, contained in a report requested by the 2014 Methodist Conference and Church of England General Synod, builds on the existing relationship between the two churches expressed in the 2003 Anglican-Methodist Covenant.