The Revd Dr Roger Walton, President of the Methodist Conference, is in Italy's capital this week to celebrate 50 years of the Anglican Centre in Rome.

As well as meeting with other Church leaders and celebrating the 50th anniversary, Roger and his wife, Marion, will be taking part in a number of activities including visiting sites of special religious significance.

"The journey we are on demands the laying-down of old fears and misconceptions of each other, and the building up of a shared story together. These celebrations mark the writing of a new chapter in the history of the Christian Church."

The opening ceremony saw Methodist representatives from across the world, including the Secretary of the Methodist Conference, the Revd Gareth J Powell, meet and address the Pope.

Since 1955, a British Methodist Minister has been stationed at the Ponte Sant'Angelo Methodist, Rome, to act informally as a link with the ecumenical work of the Pontifical Council for Promoting Christian Unity, a body of the Catholic Church. Since 2014, a more formal arrangement has been put in place.

The President's visit will culminate in an ecumenical evening prayer service and Gala dinner with Pope Francis and the Archbishop of Canterbury, the Rt Revd Justin Welby.

For updates from the President and Vice-President of the Methodist Conference, please visit their Facebook page. 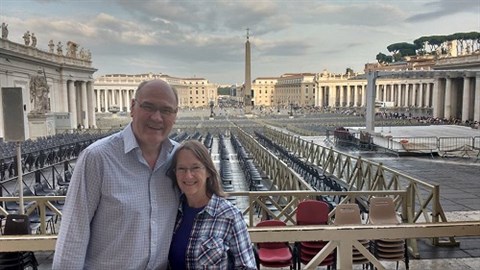