Following the elections at 3Generate, the Methodist Children and Youth Assembly, it has been announced that the next Youth President will be Phoebe Parkin, aged 17, from the Telford circuit in the Wolverhampton & Shrewsbury District. Phoebe will become the new Youth President at a service to be held in September 2020. 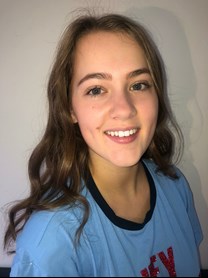 Phoebe campaigned on the theme of ‘God’s World - Our Home’ and promises to highlight environmental issues during her year in office. Phoebe impressed the voters at 3Genereate, who were aged 8 to 23, with her views on careful stewardship of the earth and by undertaking part of her presentation at the hustings through music and song.

On receiving the news of her success, Phoebe commented; “I would like to thank all the young people who voted for me and all those people in my home church and district who encouraged me to stand.”  “I have always been passionate about the environment and I believe that as Christians, we are called to take care of God’s creation. The environment is a very real concern for young people as it will shape the world we inherit in so many ways.”

The Methodist Youth President is a salaried position working full-time for one year to serve the children and young people of the Methodist Church in Britain. The role involves travelling across the UK and overseas meeting and representing the young Methodist people to ensure that their voices are heard and to help them be involved in every aspect of Church life.

The Revd Rachel Parkinson, Chair of District at the Wolverhampton & Shrewsbury District, was one of those who suggested that Phoebe stand for the election as Youth President. She commented: “I got to know Phoebe when she was part of the steering group for the “Courageous Day Out” which young people planned and led for the district last spring. Phoebe was great fun to work with, she was enthusiastic, creative, committed to her local church and to Methodism in general.”

The current youth President, Thelma Commey, commented; “I send my prayers and my congratulations to Phoebe on her election success. Being Youth President is a wonderful opportunity.  Participating in the life of the Church you really feel you are making a difference by ensuring that young voices are heard and listened to.”