Following the election results, the President and Vice-President of the Methodist Conference, the Revd Dr Roger L Walton and Ms Rachel Lampard MBE, made the following statement:

Today we are grateful that the people of the United Kingdom are able to debate and vote peacefully, and to elect our leaders democratically.

The importance of this is all too apparent in the aftermath of the atrocities suffered in Manchester and London during the election campaign. While acts of terrorism seek to undermine our democracy, by choosing to cast their ballot yesterday people demonstrated a commitment to a hopeful and just future for our country.

Some will be pleased by the outcome, some will be disappointed, others will be concerned.  We invite you to pray for those working to form a government and for all of our newly elected MPs, that they may represent constituents' concerns and interests in the House of Commons with wisdom, compassion and dedication. We also ask you to remember all those who make the democratic process possible, from council officials to those who put themselves forward for election, often at great personal cost.

A hung Parliament is a reminder that politics does not end with elections. As the Government is formed, at a time of uncertainty for our country, we call on all members of Parliament to act in ways that will build a society with the common good at its heart. We commit ourselves and ask the Methodist people to be active participants in our democracy, encouraging and challenging those who have been elected. We are called particularly to advocate for the needs of the most vulnerable in our society and world.

Finally, we rejoice in God's promise that the Kingdom of God is coming, and recognise that it is also ushered in today when we embrace principles of justice, mercy and peace; may we continue to do so. 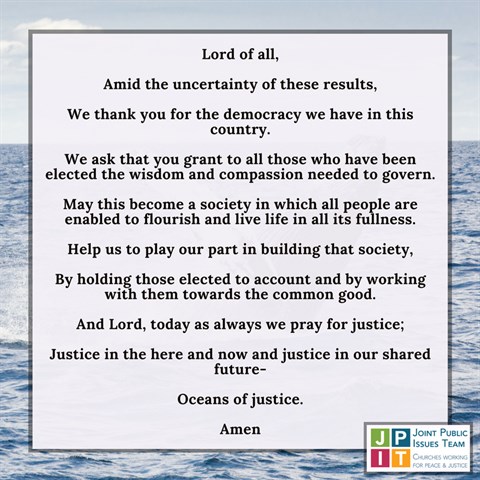