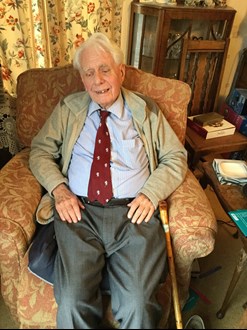 Revd Cresswell was also Chairman of Governors of Edgehill and Shebbear Colleges and a governor of Queen’s College, Taunton. He retired to North Devon in 1991.

During his life, Revd Cresswell travelled and preached widely, becoming a frequent broadcaster on radio and TV in the south-west.

For two years he was editor of the weekly newspaper published by Cliff College. Among his publications are books on Cliff College (1965) and the Gospels (1966) and the life of Dr Franz Hildebrandt (2000).

He has published two books of sermons, Lord I’ve Had Enough and I’ve Told You Twice and also two books of poems under the title Whispers of Love. He was one of the four editors of Methodist Hymns, Old and New.

His wife, Evelyn (1934-2016 née Marchbanks) was a member at Barnes Methodist Church and met her husband when he was assistant tutor at Richmond College.

She enriched his ministry, especially during his years as District Chair and President, accompanying him on his journeys around the Connexion.

They gave great interest in supporting children’s education from overseas and being patron to a non-conformist school in Peru.

He lost his sight in 2012 but continued to live independently thanks to support from his family and friends.