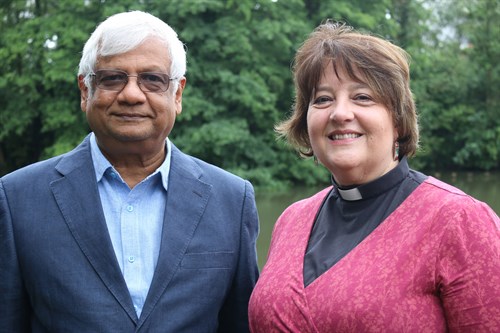 Michaela has been Chair of the London District since 2012. With a passion for social justice and for developing strong ecumenical relationships, Michaela is committed to working within the diverse and rich context of the Connexion. She is a regular contributor to the BBC Radio 2 Early Breakfast Show's 'Pause for Thought'.

"I am delighted and humbled at the confidence shown in me by members of the Conference. The context of mission for the Methodist Church is challenging and exciting and I feel hugely privileged to be able to contribute to that in a new way," said Michaela.

Bala Gnanapragasam believes strongly in mission and social justice. He serves on the board of Christian Aid and MHA (formerly known as Methodist Homes for the Aged). He is also a trustee of the London HIV/Aids Chaplaincy. He was the first Synod Secretary for the London District.

Born in Sri Lanka, Bala came to the UK in the 1960s and has previously served as an elected councillor for the London Borough of Lewisham. He has also served as the Chair of University Hospital Lewisham.

Bala said: "It is both humbling and an honour to be elected to this position. I look forward to serving our great Church."

The role of President of the Methodist Conference is reserved for presbyters (ministers) and Vice-President for lay people or deacons.

Images of Michaela and Bala can be found on the Methodist Flickr page.