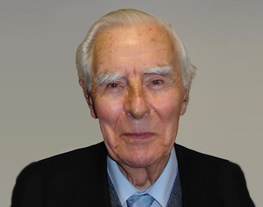 Tribute has been paid to the Revd Dr Kenneth Greet, former President and Secretary of the Methodist Conference, who died yesterday.

"Kenneth will be remembered with affection and with pride by the Methodist people," said the Revd Ruth Gee, current President of the Methodist Conference. "He was eloquent in speech, a fine preacher, a great orator and a prolific writer. All these gifts were undergirded and enriched by his great personal faith and integrity. He was passionate about social justice and deeply committed to working for peace, a commitment that was evident in every part of his life. He loved his family and he cared for and loved the Methodist people. Kenneth will be greatly missed, we thank God for his life and witness which will continue to inspire and challenge us."

Born in 1918, Kenneth Gerald Greet entered presbyteral ministry in 1943. After training at Handsworth College, he held early appointments in Herefordshire and Ogmore and in 1947 was appointed to the Central Hall in Tonypandy. This attracted one of the largest congregations in Wales and became well known for its extensive programme of social work.

After seven years, Dr Greet was taken out of this appointment to become Secretary of the Christian Citizenship Department (DCC). For the next thirty years his base was at 1 Central Buildings, Westminster. In 1971, he succeeded Dr Eric Baker as Secretary of the Methodist Conference, a post which he held until 1984. During this time, he was also elected President of the Conference 1980-81.

He travelled widely during his ministry, preaching and lecturing regularly. His most notable appointments include delivering the Beckly Lecture, the Willson Lecture (Kansas City) and the Cato Lecture (Sydney).

Dr Greet wrote a number of books on subjects ranging from ethics and morality to marriage, love and the Spirit as well as contributing a monthly article to the Methodist Recorder for over 25 years. He broadcast frequently on radio and television and held doctorates from the universities of Surrey and Ohio.

"I interviewed Kenneth during the first Iraq War in 1990," reflects the Revd Richard Atkins, Sunday presenter for BBC Radio Gloucestershire."Although very busy at the time he was happy to give me time for an interview at Treloyhan Manor Hotel in St Ives, where he was staying for a conference. I'd been in Circuit only a short time and was also working for BBC Radio Cornwall. Our conversation took place in Kenneth's hotel room. He was a very gracious man, clear in his views, prepared to stand up for a cause even when he was in the minority, as he was at that time, being against the war. Over the years I've interviewed hundreds of church and faith leaders, yet even after a quarter of a century I still remember that interview - Kenneth Greet was that sort of man."