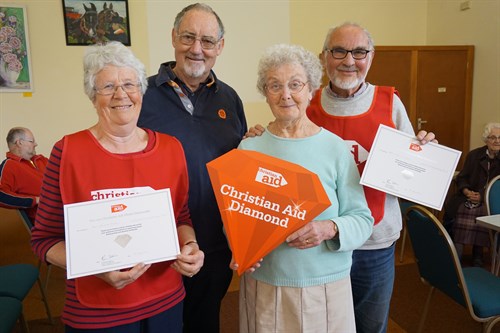 Methodist fundraisers Dick and Monica Sinden and Alan and Pauline Grassam have been recognised by the international aid and development charity, Christian Aid, for their years of dedicated fundraising.

The faithful four, members of St Mark's and Vicarage Street Methodist churches, have collected for Christian Aid Week for a combined total of over 140 years and were presented with Diamond awards by Christian Aid regional coordinator, Fiona Daborn, for their commitment to tackling global poverty and injustice.

The Diamond Awards were created by Christian Aid to recognise the crucial part played by supporters as it prepares to mark 60 years of its annual fundraising drive, Christian Aid Week, held this year from 14-20 May.

Dick and Monica said: "We've got so much ourselves and we want to do something for those who don't have our opportunities.  It was a total surprise to be recognised for this! We've had a lot of fun along the way and made lots of wonderful friends.  We look forward to many more years supporting Christian Aid."

Yeovil Christian Aid group treasurer, Les Jackson, who nominated both couples for the award, said: "They work together as a great team that keeps our local Christian Aid Group thriving.

"They have been doing it for donkeys years and never, ever, give up - they enthusiastically support the Christian Aid mission."

Fiona Daborn said: "Right now Christian Aid is tackling poverty in 39 countries around the world, including providing support to refugees and food and water to those on the brink of starvation across East Africa where the lives of 16 million people hang in the balance.

"It is no exaggeration to say that it is thanks to the dedication and vision of supporters like Dick and Monica and Alan and Pauline that we are able to not only reach these people in desperate need but also challenge the causes of poverty and empower people to lift themselves out of poverty at the same time.

"Our supporters' commitment changes lives and it is a privilege to recognise Dick and Monica and Alan and Pauline's contribution towards a world where people not only survive, but are given the opportunity to thrive."

Fiona presented the four with their 'Long-Standing Supporter' Diamond Award at the monthly Christian Aid lunch at Vicarage Street Methodist Church on Friday May 5.

You can help to change the lives of people trapped in poverty and affected by conflict and crisis this Christian Aid Week by donating online at www.caweek.org calling 08080 006 006, or texting 'GIVE' to 70040 to give £5.