From the Vice-Presidential Cupboard 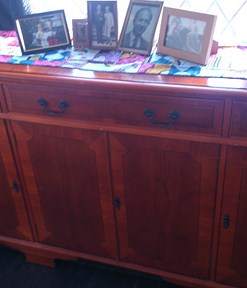 ‘Twas the night before Christmas…’ Well, in truth, it was a few days before Christmas. But the pile of papers, books and leaflets had to be moved. But where? I’d known since June 2018 of impending Vice-Presidential duties, and then stuff…lots of stuff…began to arrive. I also began to collect more stuff myself (‘that will be useful!’).

And I did not need much excuse to buy more books (‘I must mug up on that…’). But now the pile had become overwhelming, and we’d need the table for Christmas-time meals – meals with bigger family groups than usual. So where to put it all?

There was also something symbolic about sorting the papers and books, sifting them a bit, and putting them away for a while. It was good to see that some of the earlier mailings had been superseded by later ones. It was also challenging to have to acknowledge that some of what I had been sent I had not had chance to read. There are still the day jobs to do, after all. But the satisfaction of finding a parking space for some neat stacks of papers and books was immense. ‘VP-related duties’ could be put on hold for a while.

The Sabbath principle could come into play for Christmas-time. Thanks to a bit of sideboard re-arrangement, the ‘Vice-Presidential Cupboard’ came into being. It would become the place for me to deposit all VP-related material: invitations, notes I make, letters received, committee minutes, books acquired, mementoes. Much of the ‘record of the year’ won’t, of course, make it into ‘hard copy’: photos, PowerPoint slides, texts of talks. And there will be memories which even Facebook or WhatsApp can’t store. But the ‘VP Cupboard’ will be where my laptop gets stored on days off, where gifts get shoved before I have a chance to have a proper look at them and where all the papers, booklets, leaflets, postcards I receive will mount up. The Cupboard will come to stand, in other words, for the role of Vice-President, and all that goes with it.

Over the coming months I’ll be taking a few items out of the VP Cupboard to use as a basis for some reflections. It won’t quite be the ‘Story of Contemporary British Methodism in 10 Objects’, though that may not be a bad way to look at what I’ll be trying to do. The first thing I want to take out of cupboard, for example, is the Prayer Diary. Our own is slightly different this year, as you may have noticed, with only two folds instead of three.

That’s partly because Barbara and I are taking up fewer individual invitations than Micky and Bala did (how did they do 80+ and 50+ respectively in the year?!), though sometimes our District visits might be a bit longer than usual. But it’s linked with our over-arching theme for the year – So What’s the Story…? – and the image of weaving on the card, photographed by Barbara’s husband, David Glasson, is the same as on the book we produced for the year.

The reflection I want to make on the Prayer Diary is, though, less about our card in particular than the fact of the Diary, and what it signifies. Both Barbara and I were stunned to learn that 20,000 of these are produced. That’s a lot of prayer! Or at least it is if people use the card in the way that is intended. The astonishing thing is that lots of Methodists clearly do! Barbara and I have both had the experience of people saying ’I see you’re at Greenbelt next week’ or ‘did you enjoy the Isles of Scilly?’ This isn’t stalking! It may be curiosity (where are they this week?).

But it really is clearly also a basis for prayer. People want us to ‘go well’ and for God to be with us as we go, and are saying that, and thinking it, before God. Many of those praying will be using the Prayer Handbook too. Responding to the Gospel is the title of the 2019-20 edition. I’ve tried to use it myself over a number of years now. I confess I’m not a rigorous daily user (I should monitor my own habits more), and this does mean I pray for some District Chairs and some countries more than others. But it really is a great resource.

And the global dimension of it is especially significant. We remember our sisters and brothers literally all over the world. So my sideboard cupboard – the Vice-Presidential Cupboard – is like the Narnia wardrobe: when I open its doors and take out the Prayer Diary and the Prayer Handbook, I’m reminded of the praying that goes on across the world, for the world, every single day.

So that’s the first thing I’ve taken out of ‘The Vice-Presidential Cupboard’: the Prayer Diary. There’ll be nine more objects between now and next June. Stay tuned!