I had never been to a Political Party Conference before. I was keen to see the ways in which such a Conference might be like and unlike the Methodist Conference. And in the present political climate, I was simply interested in what could possibly happen next, and how the MPs we met are faring in what is a most perplexing time.

Let me come clean: I’ve been a member of the Labour Party for about 30 years, having been brought up in a working-class Tory household, and then having joined the SDP for some years in the early 1980s. So, like everyone else present, I wasn’t going as a neutral.

But attending a Party Conference of a party one doesn’t support is merely a reminder that politics, like faith, is an arena where contradictory convictions come into play, both within and across parties.

Attending the Conservative Conference as a Christian, where I was going to meet Christian MPs who think differently from me on many issues though with whom I am in agreement on some (matters of faith or politics), proved simply to be a very salutary exercise.

Two of the interviews we had with individual MPs were actually quite moving. One made us aware of just how infrequently MPs get asked how they are, and wondered whether we might pass on to our churches the suggestion that church-members might just want to get in touch with their local MP (whatever their party, and whatever their stance on Brexit) just to check out how they’re doing.

Another mapped out for us how and why he sees his work as an MP to be a Christian calling. He spoke to us deeply personally of how his faith relates to his political convictions in a way in which, he acknowledged, he could not speak to the press. It seemed quite a liberation to him to be able to speak to fellow Christians even if he sensed (quite rightly!) that some of us might have different opinions and convictions. He was aware we wouldn’t be looking for quotable quotes, or trying to catch him out, and grateful his words were not being recorded.

So those one-to-one interviews in a coffee-lounge were, I think, the most illuminating experience for me as a first-time participant. I have met MPs before, but mostly in other political or educational settings where there was a specific task to be done, or agenda to be addressed. Here, our conversations were more open-ended: what should we be thinking about? how are you? how’s your faith holding up in the middle of all this? what would you want us to say to our church-members?

Beyond that, I found the main conference hall something of a ‘media platform’ rather than a venue for conferring. It was the place where the ‘big speeches’ of the day, and the ‘big announcements’ were going to be made: ‘set pieces’ to showcase insights, campaigns, projects, plans communicated through other means to the wider public. Around those speeches were a number of platform panel discussions. The panels were avenues through which people who had achieved much at local level were able to communicate their experience to a wider audience. There did, though, seem to be quite a gulf between what the speakers were describing and the feel of the conference as a whole. I’m guessing that this may be similar to what people report about the apparent distance between the Methodist Conference and the ‘church on the ground’.

I popped in to see Humanists UK at their stand in the exhibition hall. The only other group in the hall that had a direct link with religion was the Religious Education Policy Unit. I chatted to them about religious literacy, and their concern that schools often don’t fulfil their statutory requirement with respect to RE. It made me wonder whether there’s something major that could be offered to party conferences in future years about getting a new kind of discussion going about values/philosophy/theology/religion in politics. The Humanists would quickly remind everyone (rightly) that it’s not only religious people who could start such a debate. Religious literacy is vital for society as a whole, and we need to keep on checking out the ‘values that we live by’ (whether religious or not) – across parties, across philosophies, and across religions. I guess money might be an issue in setting such an event up…

We’re entering a crucial fortnight. Who knows where we’ll be in a month’s time? It was sobering to be reminded that the people having the debates and making the decisions are human just like us. However much I may disagree with many of those I met this week I shall still pray for them, and respect what they are doing, even if I may well be sad and cross when I wake up on Nov 1st. 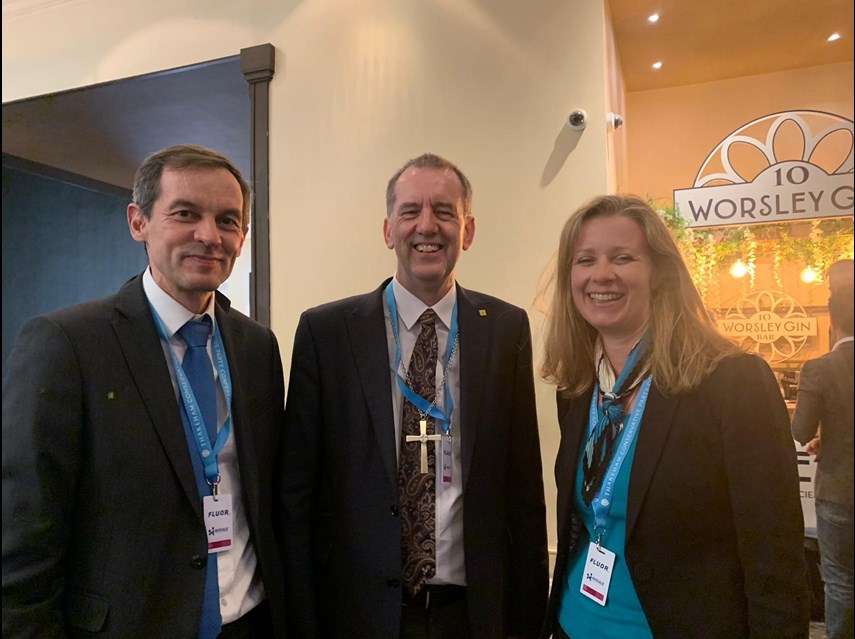 Vice-Presidents past and present meeting in Manchester: Richard Vautrey, Clive Marsh and Rachel Lampard found themselves in the same room at the Conservative Party Conference.