In August, I was privileged to attend the Fijian Conference as part of my World Church visit as President of the Conference of the Methodist Church in Britain. For the last seven years, I have been working with the people who make up the Fijian Methodist fellowships in our Connexion and supporting their chaplain the Revd Jimi Kaci, who works part-time in the Nottingham and Derby District. I went to sign a Memorandum of Understanding which cements a long-term relationship between the British and Fijian Methodist Churches, and commits us to praying, listening to each other and supporting each other as we journey together.

We reached Fiji early one morning, and were welcomed at the airport with singing. During the four-hour car journey that followed, our driver regaled us with stories and gave us a potted history of the islands. I had heard lots about Fiji from my friends in the fellowship, seen films and knew some of the history, but nothing prepared me for my first glimpses of these ‘paradise’ islands.

On arrival at our base in Suva, we were met by Simisa, a minister who is responsible for formal education and training for lay and ordained colleagues. Our welcome ceremony was held in the boardroom of the conference offices. As part of the formal greeting and ceremonial, we received food, mats to sleep on and garlands to keep us warm. These are deeply significant to the Fijian people and extend radical hospitality and friendship to visitors. I found such a welcome very moving and a significant moment in linking ourselves to each other as a sign of our faith and togetherness. 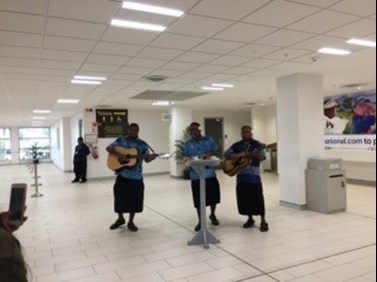 After a very good night’s sleep, we rose early for a series of meetings with recipients of grants from the World Mission Fund. Our first meeting was with the Trust Committee, a group set up to establish and keep in good order all the property the Church owns (our nearest equivalent would be our Trustees for Methodist Church purposes). All the members are volunteers and the Chair is the President of the Fijian Conference. It was a meeting that challenged me about what trusteeship really means.

I also met with the Land Registry Team, which is working hard to establish which land belongs to the churches and to register it all. The team has been working on this for the last 5 years and has so far registered 35 of the 58 divisions. The Conference is held annually and is two weeks long. The first week is an experience in itself as choirs come from all over the islands to sing in competitions. 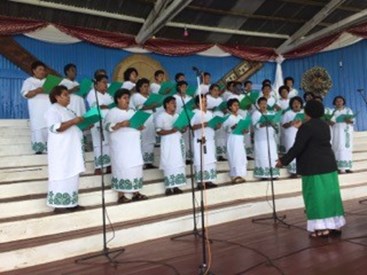 At the next meeting about education and in-service training for lay and ordained, I quickly recognised what a task this was. There are 17 schools on the main island and developing a curriculum is a full-time job. Presbyters train for three years in college and then three years on probation and there is great need for a well-planned programme of ongoing leadership training. There were many informal conversations along the way and I rejoiced in those about faith, mission and evangelism.

Then there was the Conference. The ministerial session of the Conference was very interesting as all the ministers have to attend, 400 in all (with very few women presbyters, though interestingly the deacons were all female). Every day of the Conference starts with an act of worship at 8am. The President enters around 9am to start the formal business, which concludes around 6pm (we work on ‘Fijian time’). 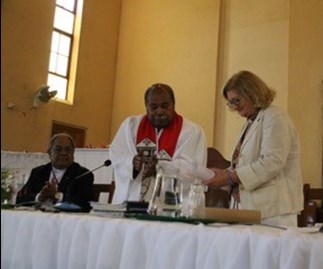 The Conference then went on to deal with issues much like ours: decisions about ministry and mission, property finance, election of officers. The ordination service started at 7pm on Sunday evening with a large choir, lots of singing, readings and prayers. For me, the most compelling part was when the ordinands came into the Conference to be examined by the ministers. The 14 presbyters and 3 deacons were questioned on a number of issues, which must have been scary in front of the whole of the Conference with questions coming from all parts. They got through, but at times it seemed like touch and go. Later, I had the privilege of ordaining them with President Tevita and then preaching at the worship – not getting up to preach until 8.30pm, but no one seemed worried about the time. 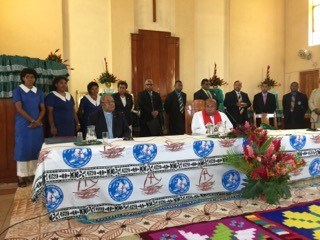 I took a morning off from the Conference to attend a seminar led by one of our mission partners: Julia Edwards, who works with market traders on climate change. It was fascinating learning how best to cope when hurricanes and bad weather come and how to deal with rubbish left at the end of the day’s trading. I had a very stimulating conversion with two women who are the caretakers of their village’s market. They were very concerned about the number of women who arrive to sell with their small children, so they had started to think about having a school near the market. They had also built an overnight shelter with showers for women travelling to the market, and were hoping to open a women’s clinic as part of it.

We then visited another of our mission partners, the Revd Val Ogden, who works at the Pacific Theological College. Val is director of a distance learning arm at the college; she is doing a fantastic job.

We had to leave midway through the Conference due to my other commitments, but we came away with a mountain of gifts. The generosity and the hospitality offered by our World Church partners is to be admired and this visit will stay long in my memory.