What links one of the most rousing Christmas carols, the leader of Methodist movement Charles Wesley and instigator of the European printing revolution Johannes Gutenberg? ‘Hark! The Herald Angels Sing’ has an intriguing history…Charlotte Hoare, Special Collections Librarian at the John Ryland's Library, Manchester takes a look.

The Methodist collections at the John Rylands Library are a rich resource for the study of hymns and hymnody (the composition and singing of hymns). The Library holds the papers of one of the greatest and most prolific hymn writers, leader of the Methodist movement Charles Wesley (1707-88). Wesley’s output was astonishing, he composed over 6000 religious verses, the most of any male writer (Fanny Crosby beats him with 9000 to her name). This creative passion ran throughout his life; he is reported to have spent even his last years composing on horseback before arriving at his brother John Wesley’s home on City Road in London ‘crying out “Pen and ink! pen and ink!”’ and hastily jotting down his latest inspiration. 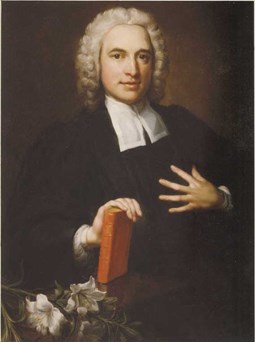 The origins of the carol in question, however, begin earlier in Wesley’s life. ‘Hark!’ was written within a year of his conversion in 1738, a profound spiritual experience that lends a personal dimension to the closing line of the first stanza: ‘God and Sinners reconciled’. The Library holds a unique manuscript copy of Wesley’s version of the hymn, penned in his own hand. It is bound in a volume containing both printed and manuscript hymnals, which was owned by Wesley and later given to Richmond College by Wesleyan minister, Thomas Jackson. The hymn was first printed in 1739 in Hymns and Sacred Poems under the title ‘Hymn for Christmas Day’. 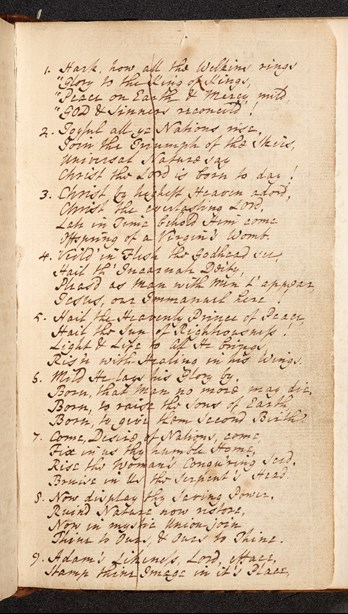 Manuscript hymn in the hand of Charles Wesley: “Hark, how all the Welkin rings’. Ref. MA 1977/423 (Courtesy of the John Rylands Library)

There are some noticeable differences to the hymn we are familiar with today. It is the ‘welkin’ that ‘rings’ rather than the angels that sing, and Jesus is celebrated as the ‘King of Kings’, rather than ‘newborn’. ‘Welkin’, now an archaic term for firmament or heavens, was edited out of a subsequent version collated by fellow evangelist, and friend of both John and Charles Wesley, George Whitefield in 1753. Professor of Church History at Perkins School of Theology, Ted A. Campbell, jokingly remarks: “I have wondered if anybody but Charles knew what a welkin was supposed to be. Maybe John looked at the draft version and said, ‘It’s ever so lovely, Charles, but whatever on earth is a ‘welkin’?’ So, all the more reason to give thanks for the editorial work of George Whitefield” (quoted here).

The jubilant energy of the melody is also not Wesley’s work. The original was intended to be sung to the more plodding tune of his Easter hymn ‘Christ the Lord is Risen Today’. Thankfully for carol enthusiasts perhaps, almost a hundred years later the German composer Felix Mendelssohn composed the cantata Festgesang (‘Festive Hymn’) which was adapted as the standard tune for ‘Hark!’ In an apt bibliographic twist, Mendelssohn’s melody is also named the ‘Gutenberg Cantata’ as it was written to celebrate the 400th anniversary of Johannes Gutenberg’s invention of the European printing press with moveable type. At the John Rylands, Charles Wesley’s original manuscript and a copy of Gutenberg’s famous printed Bible sit happily together on our shelves, both key players in the history of this popular festive hymn.