This week is the 400th anniversary of the start of the Mayflower voyage from Plymouth to the USA. Carolyn Lawrence shares her family connection with one of the people who was on the historic sailing.

The voyage of the Mayflower began with a group of religious Separatists seeking an escape from persecution and September 2020 marks the 400th anniversary of the beginning of their journey to a new life of freedom in America.

This group of Christians had become independent from the established church and were seeking a safe place to practice their faith.  They began by escaping to the Netherlands where there was more tolerance of differing viewpoints, but found it hard to settle to their new surroundings and a new language.  The group, who later became known as the Pilgrim Fathers, commissioned two ships to carry them to their new life across the Atlantic – the Speedwell and the Mayflower.  They met in Southampton, planning to sail directly to America but problems with the Speedwell caused them to have to stop for repairs in Dartmouth and then again in Plymouth in Devon.  The Speedwell was unable to continue the voyage so the Mayflower sailed alone to the New World, carrying around 30 crew and just over 100 passengers - 50 men, 19 women (three of whom were pregnant), 14 young adults and 19 children.   Around half of the passengers were Separatists fleeing persecution and the other half were what we would now call economic migrants seeking work in America.

I have a personal interest in this story because amongst the passengers were my 10th Great Grandfather, John Tilley, and his wife, Joan, from Bedfordshire, where I was born and grew up.  I discovered this exciting link with the Mayflower from my Dad, who whilst researching our family tree, came across John’s name in the Bedfordshire archives and Parish records, and accidentally stumbled across information on the internet, linking him to the Pilgrims’ voyage.  Their son Robert, an apprentice tailor, who was 16 at the time of the sailing, hadn’t joined them on the journey and remained in Bedford.  He went on to marry and have four children and died in Bedford at the age of 39.  His descendants have continued to live in the Bedford area for the past 400 years.

Those on board the Mayflower faced a long and arduous journey across the Atlantic.  The ship had left England much later in the year than was originally planned so the weather was deteriorating.  The vessel was storm tossed for the 66 day crossing and at one point the ship almost sank in high seas.  During the voyage one of the women gave birth to a son and named him Oceanus in remembrance of the circumstances of his arrival!  The passengers became weakened and sick, some developed early signs of scurvy, some became depressed and they all endured cramped and unhygienic living conditions in the bowels of the boat. The ship got blown off course and landed in the wrong place.  The ship alighted on 21st November, much further north than anticipated and they arrived on to a cold, snowy, inhospitable environment, just off the tip of Cape Cod, Massachusetts.

On arrival in America, the Pilgrims were determined to live by values such as freedom of religion, freedom of conscience and democracy, and they created the ‘Mayflower Compact.’  John Tilley and the other male passengers all signed this compact which formally recorded a set of rules to help govern their community.  This document went on to have a great influence on the creation of the American Constitution.

Sadly things did not go well for the Pilgrims in their new life and they struggled to survive.  They were befriended by some local Native Americans who taught them some of the skills they may need and helped them to find food.  Their first winter was harsh and over half of the Mayflower’s passengers died of sickness and cold during that first winter.  The Bedfordshire Parish records show that John Tilley himself died at some point during the winter of 1620-21 and his wife died in January 1621.

Those who survived, managed to plant crops and settle in their new home and the Autumn of 1621 saw the Pilgrims reaping a harvest and celebrating what was to become the American Thanksgiving Day.  The survivors wanted to give thanks to God for helping them through what had been a horrendous year.

The significance for us today

What does this story teach us today?  The story of the Mayflower Pilgrims is one of persecution, migration and the search for freedom.  It tells of a group of Christians fleeing persecution for their beliefs and seeking safety in another country.  While the Pilgrims themselves sought to live Godly lives in a new land at peace with the indigenous people, the story also has to be seen alongside its connections to the colonisation of the Americas and has to be remembered within the context of the stories of people from different perspectives.

For me, personally connected to this story, it is a reminder that modern day stories of persecution, migration, asylum seekers and refugees are not new, and that any family at any time could get caught up in the need to flee to safety, relying on the kindness and hospitality of strangers.  It also reminds me that religious persecution hasn’t gone away and discrimination against Christians is getting more severe than ever.  Open Doors UK (a charity supporting and advocating for persecuted Christians) report that there are a staggering 260 million Christians in the top 50 countries on their World Watch List who face high or extreme levels of persecution for their faith.  It is a stark reminder to pray for our beleaguered sisters and brothers who don’t enjoy the freedom of belief that we have in the UK and to seek to support them in any way we can.

This story also reminds us that many of the refugees and asylum seekers we hear about in the news have left their homelands because they are fearful for their lives because of poverty, war or persecution and are seeking to provide for their families in any way they can.  Just as we would do for our families if we were in the same position.  The Joint Public Issues Team are working to find ways to support asylum seekers and refugees.

Finally this story speaks to me about being a pioneer.  My daughter on discovering our part in this history, jokingly said, ‘So you’re the first person in our family to leave Bedford in 400 years!’  Since becoming a Christian I have sought to seek God’s will for my life and to be obedient to what he calls me to do.  This has meant a lot of moving around to new places and I feel that God has called me to be a pioneer and not a settler.  I have found that being a follower of Jesus is a roller coaster of a ride and never dull – sometimes it is tough and I have been obedient through gritted teeth but have always known his peace, strength and equipping for whatever I have been called to do.

I currently live close to Plymouth, Devon and this September, many events were planned to take place to commemorate the sailing of the Mayflower, culminating in an ecumenical service at which I was to take part, on Plymouth Hoe.

Sadly and not surprisingly, the planned celebrations are now not able to take place because of Covid-19 and many events have now been postponed to take place next year.  The team planning the celebrations will take into account the different cultural perspectives on this anniversary and seek to tell the story sensitively as they explore the experiences of those impacted and tell of some of the ruthless consequences of colonisation.  You can read more about this here.

Carolyn Lawrence, Vice-President of the Methodist Conference, pictured below at the Mayflower Memorial in Plymouth. 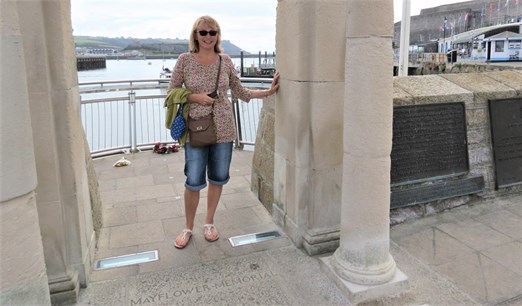