Reflecting on a visit to the North East

Following a visit to Darlington district, Barbara Easton reflects on the impact of the rise in the cost of living on people she met there and on the life of service of Her Majesty the Queen in the week in which we mark the 70th anniversary of her accession to the throne.

This week, as Vice-President, I did what seemed like 1001 ‘good things’. At the end of a very tiring visit and while on a seemingly interminable rail journey, I was challenged about another good thing – but one that I had failed to do. Already near the end of my tether, I found the criticism stinging.

The President and I spent a jam-packed weekend in Darlington, observing all the seeds of hope being planted by the people of God in the District – parts of which frequently fall into the category of the most deprived areas both in the UK and in Europe. Some of the great manufacturers remain, many have closed. People who expected their lives to go one way have found themselves having rapidly to change career-direction, some more than once. Others have spent many years with neither work nor the hope of it. Some of the places we visited were simply delightful. Some had seen much better days. As we helped with the church foodbank on the Sunday, we chatted to the people coming through – I forgot to look for the face of Christ in each of them, but I clearly saw the faces of people in my family, my grandparents, children I have taught, people in my community. I was glad to help and dismayed that, in 2022 in the 6th largest economy in the world, we had 250 people quietly queuing around the block for food. And distressed that we had to send many away as the mountain of food (which would otherwise have been supermarket food waste) just didn’t go far enough. ‘In as much as you did this for the least of my brothers, you did it for me’. 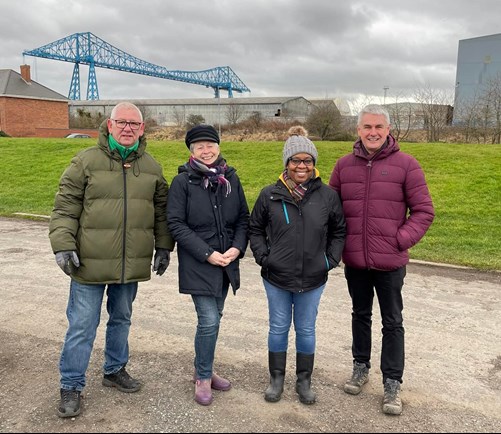 Barbara and Sonia visited the Darlington district this weekend

I know that it’s not just in the North East that people are really struggling – I spent 40 years in a Midlands city which has got to the front of the queue for ‘levelling-up’ money. It is often reported as the city to have experienced the greatest decline in the last 10 years. JPIT research highlights the differential in the financial impacts of the pandemic between those who were already financially vulnerable and those who are secure. It’s those in the lower part of the pile (and not just the obvious ‘very bottom’) who have been left even worse. This is so difficult for people who are secure to understand, because an aspect of financial security is being able to cope with a bit of a disaster. But when you have very little cushion between ‘getting by’ and hitting the bottom, even a ‘small’ problem can become a mountain. If my cooker breaks down, I can get it fixed; I might even get a new one. If I were poor, I couldn’t afford the repairs… but then I can’t get hot meals, for me or my family.

As I looked at the people in the foodbank yesterday – perfectly ordinary people like you and me, I wondered how they were going to cope with the fuel crisis that is breaking around us. If they were this glad to get a box of eggs, how will they ever going to be able to pay for heating? Or, for that matter, light or cooking? I’m not convinced that being told that they’ll get £200 off their bills now but will pay an extra £40 for the next five years will give them reassurance. I remember, and will always remember, my mother standing in the kitchen crying because we’d had a letter saying that ‘water bills’ had suddenly been invented. My mother managed the money so carefully, eking out my dad’s low pay from the two jobs he worked, one in the day and one in the evening. She just could not conceive where this extra money was going to come from. People tell me how appropriate it is that we pay for our water: ‘It’s not free you know’ – but these are people who can afford to pay. I don’t know how we paid the water bills but I do know I had the same pair of broken spectacles from the age of 14 to 17. That’s not a good look for a teenage girl…

Amidst the news about poverty this weekend we have also had cause for celebration: the 70th anniversary of the Queen’s accession. This isn’t just a good excuse for a party (that, after all, will come later in the year and I do hope that churches are going to embrace the missional opportunities this affords) but a moment to reflect on the nature of the leadership she has shown. Her Majesty is very different from us, and there’s something about monarchy that seems to belong to an age other than this one. And yet I think that the Queen’s example has a lot to say to us today. She has answered well John Wesley’s question, ‘What is the work of God in this place?’ She found herself, like many people in Middlesbrough, re-routed into a role that wasn’t in people’s original expectation, adapting to much change along the way, and within which what has ‘had’ to be done might often have taken priority over what would have been chosen. I think of the smiling, and rather surprising, young woman in a wartime uniform enjoying her job as a mechanic or the mum with a husband and four children, all of whom want and need different things from this woman who also has a job to do. Does she get tired on long, long train journeys, or feel the sting of criticism when she’s really trying her royal, but oh-so-human best? We don’t know about any of that, because she undertakes her role with outstanding professionalism and grace. The watchword of her life seems to be duty – a duty to which she believes God has called her and for which God equips her. For me, she models a leadership which is about what she can give to the role and not what she can get out of it; she personifies faith lived out in life-as-we-find it, a daily model of listening to what God wants of us in the world and trying to live it out with integrity. This is the leadership that is at the head of our nation and I am grateful for what she brings. Although the Queen’s life in royal palaces seems a long way from the life of the people in the queue at the foodbank on Sunday, these people are all my sisters in Christ. God bless the people of the Darlington district, their foodbanks and asylum seeker projects and addiction recovery projects. And God save our very gracious Queen.

Barbara Easton is Vice-President of the Methodist Conference