Reflecting on the Passion story through art

The best service I have ever taken in my 40-odd years as a Local Preacher was the one in which I did hardly anything myself. It was a bit of a risk, and maybe risk-taking is part of the message – but I am always aware that the people who turn up in church on a Sunday morning bring a range of emotions and perceptions to the worship, some known and some not-known. Not everyone’s spiritual needs are met by ‘The Service that Goes Wrong’ so risk always needs to be accompanied, I think, by a strong ‘Plan B’.

This particular service was for Passion Sunday at a time when I had only recently discovered the joys of the Methodist Collection of Modern Religious Art. I was (and am) quite evangelical about the collection and couldn’t (and can’t) understand why this marvellous, rich resource is not better known and used amongst the Methodist people. It is an international treasure, regarded as second only to the collection in the Vatican, and in the trust of the Methodist people in Britain. On this occasion, I resolved to ‘spread the love’ by inviting others to join me in exploring the paintings to tell the Passion story. 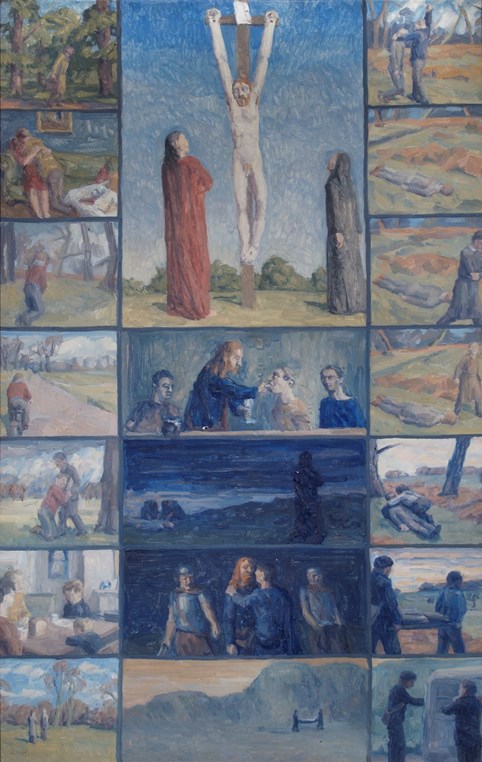 For the children’s address, I used Francis Hoyland’s ‘Crucifixion Polyptych’, asking the youngsters (abetted by the older members of the congregation) about the different things they could see, and talking about how the events of the next couple of weeks would unfold before they were in church on Easter Day. This was relatively safe because there was lots to talk about and, although the reins with which I was holding the conversation were relatively slack, I was ‘safely’ holding them myself. Hoyland’s picture is a rich tableau of images, some clear and some puzzling, some in modern and some in historic settings. It proved a real talking point and this, for me, is an aspect of what inclusion is about – holding a safe space for the congregation to engage and reflect, instead of a directive and domineering presence from the front.

The risky bit was yet to come: I had asked three members of the congregation to look through the collection online and reflect for about four minutes on the picture which spoke most to them of Christ’s passion or of their own experience of suffering. Two of these ‘should’ have been safe pairs of hands – one a supernumary presbyter who was probably, even then, in the early stages of yet-to-be-diagnosed dementia; the other a minister’s widow – an articulate older woman, generally thoughtful and confident but whom I’d never before heard address the congregation. She chose Ghislaine Howard’s ‘The washing of the feet’ and I remember her exploration of the oversized hands and the overuse of blue in the picture. She focused on the intentionality of performing the act of service – remembering the time, when AIDS was a new thing and as a ‘mere’ hospital secretary, she had courageously stepped out of the crowd to push the wheelchair of a patient whom all the porters were refusing to go anywhere near. Like the washing of the feet, this was both a practical act of kindness and a challenge to the whole order of things as they stood. And all this from a pint-sized elderly lady.

Then the even more unexpected happened – my third invitee took to the pulpit. A young woman who has her own business as a make-up artist and is herself tall, fashionable and glamorous. I don’t think it’s doing the rest of us a disservice to say this makes her rather distinctive against the rest of the congregation! Of her generation of twenty-somethings from Junior Church she was the only one still coming - mainly, I guessed, to accompany her grandparents. It didn’t start well, as she began by explaining that she’d looked through the whole collection on-line and none of the pictures had done anything for her! Until, she said, she got to this one, which brought her up short – the picture she had chosen was Ralph Beyer, ‘The Son of Man is Come’. She went on to talk about how, when she had been ill a few months before (I had not realised quite how badly) she had found life so difficult that she didn’t know how she could possibly go on. At her darkest moments she simply felt that Jesus intervened and carried her through. This picture told her story.

However, this wasn’t the important bit. Here was a young woman completely unused to the pulpit and to telling her story. She had not got very far through her notes when she was overcome with tears. It could have been awkward but it was actually the most powerful moment I think I have experienced in worship in the church family. No-one moved. No-one was embarrassed. You could almost touch the silence. We all just sat there, holding the space for one another. It was remarkable. Of course I got up to try and help her out but she put up her hand to stop me. The woman weeping silently in the pulpit in testimony to God’s grace at her time of greatest need was the best sermon we ever had.

As a footnote to this story I will add that the picture about which I was ready to speak was Maggi Hambling’s ‘Good Friday: Walking on Water 2006’ but, by the time my young friend had finished, anything I could say was simply redundant. But, as Lent progresses and the world rumbles with difficulty and uncertainty, I would encourage you to look at this painting, which represents the mysterious and miraculous triumph of the light of Christ over the turmoil and fearsomeness we find in life. Hambling is a great sea painter and, as I understand it, paints a new ‘Good Friday’ every year. This is the blessing of the round of the liturgical calendar – an acted reminder, no matter how we feel, that though ‘weeping may endure for a night, joy comes in the morning’ (Psalm 30:5).

Barbara Easton is Vice-President of the Methodist Conference 2021-22