When there was a rainy day, our PE Teacher, instead of us going for the usual cross-country run, would instead take us to one of the nearby museums. As my secondary school was in South-East London, this often meant a trip to the Imperial War Museum. I always thought it strange that all the images of soldiers were white ones. Did that mean that there were never any Black people who fought in either the Great War or the Second World War? But the evidence suggests otherwise. 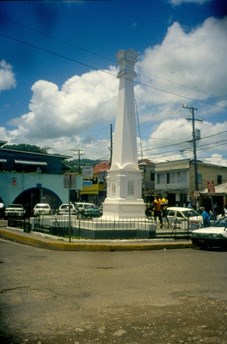 Here is a picture of a War Memorial In the centre of a small town. The difference is that this picture was taken in Port Antonio, Jamaica. And then, after I was inducted as President of the Methodist Conference, I received this recollection from Rev Stanley Webb, a supernumerary minister in Birmingham…

"I would like to share something from my own life.  I was born in 1937, the youngest of 6 children.  My father was a labourer in a cotton mill.  He had been badly wounded in 1916 in the Battle of the Somme and his sight was poor.  When my eldest sister and my brother were called up to serve in the Forces at the beginning of the second World War the Birmingham Council billeted three men with us who were working at an Aircraft Factory here in Birmingham.  One of them was Max Richards, originally from Jamaica.

"Max, not married, was a devout Anglican, and each Sunday, dressed very smartly, he would go to the Church of England opposite our house.  He became like an uncle to us.  As a toddler I would sit on his knee and talk with him.  When my brother and sister were demobbed Max went to live in other lodgings.  He kept in touch with my parents, and after some time contacted them to let them know he was in Hospital.  He had been badly treated and was homeless, left with just one case of his belongings.  My Mum and Dad took care of his case and visited him, but he died in hospital.

"Then, a few years ago, at a family gathering, my brother's daughter gave me a Medal from the First World War which she thought had belonged to my Dad.  Round the rim it was inscribed 3747: Private Maximillian Richards, Monmouthshire Regiment.  Through the British Legion I was able to find more details.  The Monmouthshire Regiment had been amalgamated with other Regiments, but they gave me the address of the Regimental Museum in Brecon.  I wrote to them, telling them about Max and asking if they would accept the Medal into their collection, along with details of Max's time with us.  They replied saying they would be delighted to do that, and Max's Medal is now with the Museum.  I felt that it was important that the Medal was carefully kept.  I am 84 and my one surviving sister is 88.  When we are gone no-one will be left to remember Max.

"Here was a devout Christian who had come from his home in Jamaica with thousands of others from the then Empire to fight in a European war.  Sadly, so many of them have never been remembered, but we have never forgotten him and the part he played in our family."

I share this recollection so that it becomes a part of the historic narrative of all those who faithfully served and fought for Britain regardless of ethnicity.

The Revd Sonia Hicks, President of the Methodist Conference (with grateful thanks to the Revd Stanley Webb and his wife, Catherine).