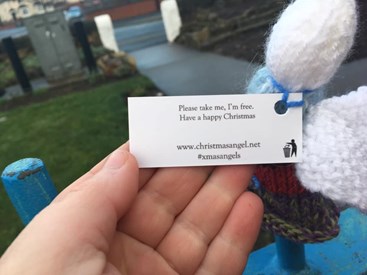 In December 2018, the churches in Carlisle city centre found a creative and playful way of spreading the message of Christmas joy. Inspired by a similar project in Newcastle, volunteers from the Methodist, Salvation Army, URC, Anglican and Church of Scotland churches made and distributed many hundreds of knitted angels, hiding them around in plain sight for people to find. Each angel had a tag tied around its neck with a simple Christmas message and a link to a Facebook page where people could post pictures of the angels they had found. In total 1,403 angels were put out and some amazing comments were posted to the Facebook page or sent as private messages to the administrators. For some people, the angels represented loved ones who had died and were, for the people who found them, a sign of hope.