Inclusive Evangelism on the Street 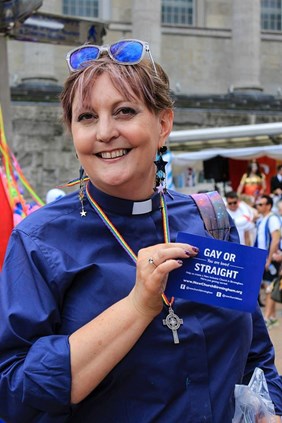 New Inclusive Church Birmingham launched with a commitment to be Jesus-centred, radically inclusive, and authentically evangelical, and so they decided that their first public evangelism outreach would be to march in the Birmingham Pride Parade, which draws tens of thousands of people to the streets of England’s second city. Many of the church marchers had never done any street evangelism before, and they were nervous. So instead of just walking down the centre of the street with a sign with the church name, they decided to actually talk with people along the route. They handed out leaflets with a the Gospel message “God Likes You”:

As they handed out these invitations and engaged people, they found their nervousness diminishing and these once-reluctant evangelists were now hugging people, high-fiving people, blessing people, proclaiming to people “God loves you” and “God likes you.” By the end of the parade,  they were dancing and skipping down the street, singing and jumping and full of Pentecostal joy, and one straight guy said, “That was the most fun I’ve ever had in my life! Can we go back to the beginning of the parade route and do it again?!” That is biblical evangelical joy!