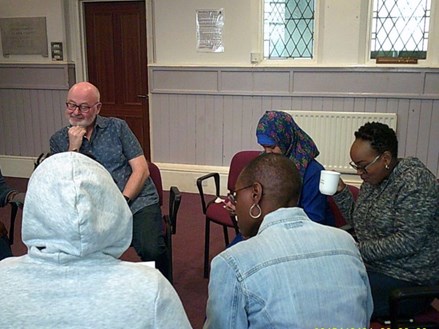 The Feast is an interfaith initiative which brings teenagers together to explore faith and to build confidence and friendships. Facilitators work hard to create intimate and safe spaces and the topics they discuss are ones that young people are concerned about. The Feast allows young people to develop listening and sharing skills which they can use in their everyday lives

Chauncey came to The Feast through a Methodist partner in Birmingham but initially had doubts about the programme. His first experience was a baking challenge, where he quickly forgot his reservations and joined in with the group discussion. After the young people had baked cookies and gulab jaman, an Asian dessert, they took them out onto the streets to share with the neighbours.

Afterwards, the young people looked at the similarities and differences between what they had baked and were then asked to talk about the similarities and differences between their faiths. Chauncey sat with two Muslim boys and as they talked about their faith, they discovered that both Muslims and Christians believe in Jesus although in different ways.

This encounter had a great impact on Chauncey; he grew in confidence, made friends and took part in more activities throughout the week. Since then, Chauncey has become an ambassador for The Feast. As well as going to all the holiday encounters, he regularly supports the Methodist Church: travelling to different churches and telling people about the initiative. In November 2018, he joined youth workers from The Feast at the national gathering of young Methodists and told his story of how his life had been transformed by his experience.