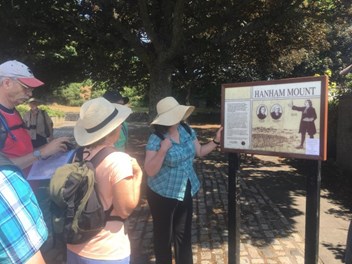 The Revd Richard Sharples, minister of Victoria Methodist Church, Bristol, led a group of 15 pilgrims on the first ‘Bristol Pilgrimage’.

The idea was born after the Revd Sharples’s daughter returned from a year in Savannah, Georgia. He wanted to pick up the story from the failure of John and Charles Wesley's time there.

“With the encouragement of George Whitfield, John Wesley came to Bristol in the spring of 1739,” explains Richard. “In his own words, he ‘submitted to be more vile’ in adopting the practice of preaching outdoors. He preached to 1500 people at Hanham Mount, on the east side of Bristol.”

The pilgrims stayed at Parkway Methodist Church, then set out from there on the second day to walk from the New Room to Pill. Their first stop was ‘the Nails’ on Corn Street. Here, the pilgrims reflected on the binding commitment Boaz made to marry Ruth.

“I've led a number of pilgrimages in the past, and my concern is always to see pilgrimage in the context of mission,” Richard said. “I always try to place a story from scripture alongside the story of the place through which we are walking, and allow the two to throw light on each other.”

The final seven miles of the pilgrimage lay along Bristol's waterfront, out under the suspension bridge and along the Avon Gorge to the small village of Pill. “It was from there that first Francis Ashbury, and later Thomas Coke, set sail to make Methodism into a world Church,” Richard said, “and in ships not much bigger, I guess, that John Cabot's Matthew – a replica of which fired a salute to the memory of those early Methodists (and to today's pilgrims) as it sailed past.”

“What impressed me was the sense of fellowship amongst the group, especially around the meal table in the evening,” commented one of the pilgrims, Hazel, from Wrexham.