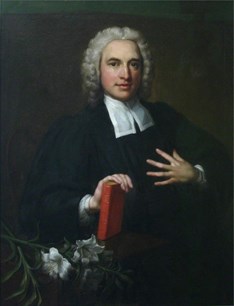 The state-of-the-art museum at the New Room has just received another boost for its collection with the arrival of a famous 18th century oil painting of Charles Wesley, the greatest of English hymn writers.

The portrait, popularly known as the ‘lily’ portrait because of the spray of lilies featured in the foreground, comes to Bristol from the museum at Epworth Old Rectory in Lincolnshire, the childhood home of Charles Wesley and his famous brother John, with whom he co-founded the Methodist movement.

The oil on canvas painting is said to date from 1749 and is generally attributed to the prolific and well-regarded British portraitist Thomas Hudson, whose pupils included Joshua Reynolds.

Charles Wesley, who relocated to Bristol the same year the portrait was allegedly painted, is represented holding a New Testament in his hand which was possibly intended to symbolise the sitter’s aptitude for preaching – something at which Charles excelled.

The lily in the foreground of the portrait may also have been included as a familiar symbol of purity and devotion.

Gary Best, Methodist historian and volunteer warden of the New Room, said: “It is fantastic that we have been given the only known portrait of Charles Wesley as a young man, and we’re delighted to be able to share it with visitors to our museum.