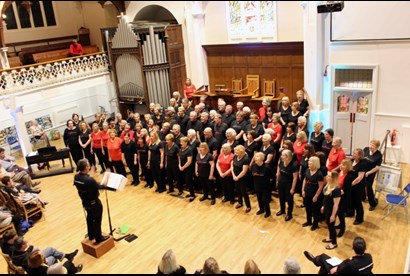 Following a very successful Last Night of the Proms by the combined bands of The Salvation Army the Show Choirs from Leigh, Ashingdon and Thorpe Bay came together on Saturday night at Wesley. The Leigh Choir meets at Wesley on Tuesday evenings 8pm-10pm.

This combined choir of some 90 voices gave a performance  which included music from Les Miserables, Rent, Oliver, Mamma Mia and various Disney musicals.

The second half saw  favourites such as “You will never walk alone “and the audience was drawn in to create a combination of some 225 voices singing in a short piece from “The Greatest Showman”. The evening was brought to a close with what the Choir called their showstopper 'One Day More' and it was just that. A resounding success

All of the proceeds are going to the work of the church which particularly focuses on being there for the young, older people. those with dementia and their carers.

The programme continues on 9 June when the Allegro Choir returns to give a concert.