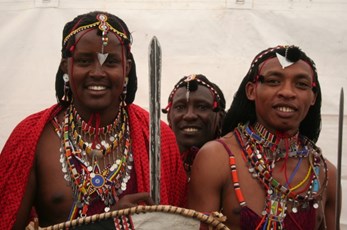 The Osiligi Maasai Warriors, a tribal group from southern Kenya, recently performed authentic songs and dance, as well as their famed jumping, at Penrith Methodist Church in Cumbria.

Wearing traditional ceremonial dress, the group gave an evening of entertainment that was a colourful and exciting mix. In recent years, the Warriors, working with Osiligi Charity Projects have transformed their local communities with new water stations, a new orphanage, church and community centre as well as a new school
with more than 200 sponsored pupils.

The Revd Dave Milner commented, 'It was a wonderful evening of traditional songs and insights into Maasai culture. The Church was full, with visitors coming to the event from all over the county. We all learned so much about the way of life for the Maasai people, especially how they cope with government land reforms which have ended their traditional nomadic wandering."