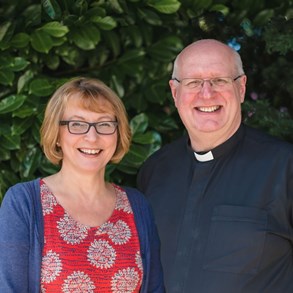 The Revd Richard Teal and Carolyn Lawrence were inducted as President and Vice-President at the Methodist Conference (conducted online) on Saturday 27 June 2020.

Richard is a Methodist presbyter and was brought up in a small Yorkshire Dales village, where his father was a farmer.

After leaving school, Richard worked in textile management and during that time he candidated for the Methodist ministry. He attended Wesley College, Bristol, and left a year early due to the shortage of presbyters at that time.

His first circuit was Blaydon in the Newcastle-upon-Tyne District and he was then sent as Superintendent to what in those days was a priority appointment in Berwick-upon-Tweed on the English-Scottish border.

Nine years later, Richard returned to East Yorkshire and served as Superintendent of the Beverley Circuit. In each of these appointments there was significant church growth. After circuit ministry, Richard served for 11 years as Chair of the Cumbria Methodist District and his experience of rural ministry came to the fore.

His understanding and appreciation of rural issues helped considerably when Cumbria was devastated by two county-wide floods. In 2010 a gunman killed 12 people on the west coast of Cumbria and Richard had a significant role in leadership and pastoral responsibility.

In his time in Cumbria, Richard had at least two other very significant roles: first in enabling the region to become the first ecumenical county in Great Britain.

Second, he formed a strong agricultural chaplaincy team to bring pastoral support to the agricultural community and beyond. Richard greatly values rural communities and encourages rural churches to take risks and do new and exciting faith activities.

For Richard, a small rural chapel is not a failed large church. Small communities are important and significant in building the kingdom of God. Richard was also contributor to A Discipling Presence, a workbook that promotes an effective Christian presence in rural communities (Methodist Publishing, 2017). Richard is married to Susan, and they have two children and two grandchildren.

Carolyn has a background in primary education and was an educational mission partner in Guyana with the Methodist Church in the Caribbean and Americas.

She is also part of the ‘World Federation of Methodist and Uniting Church Women’, serving as the Area Officer for Great Britain. Carolyn grew up in a non-Christian home but became part of the Methodist Church through the Girl Guides and gave her life to Jesus at the age of 15.

She then spent three years in an Assemblies of God Pentecostal Church where she was baptised, received the baptism of the Holy Spirit and got married. Carolyn and her husband Mark felt called back to serve in the Methodist Church where they have worshipped now for the past 36 years.

Carolyn has a heart for sharing the love of Jesus through preaching, teaching, pastoral care and social action. Wherever people are on their spiritual journey, she enjoys helping them to grow in their faith and she encourages them to become ‘disciple-making disciples’. She and her husband have two grown-up married daughters, three grandchildren and two cats.