Please note that the Code of Fundraising Practice has been reissued following a consultation. It clarifies the standards expected of charities, consolidates existing regulations and  differentiates more clearly between the law in different jurisdictions. It comes into effect Tuesday 1st October: 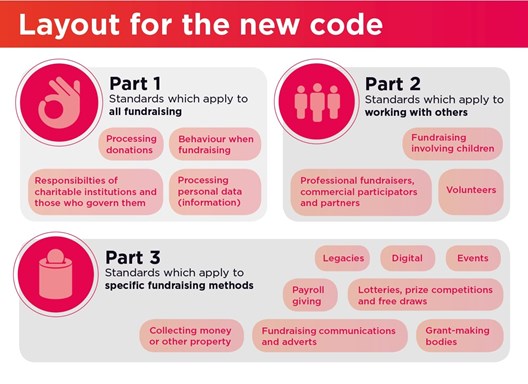 A number of circuits contacted the Connexional Team at the end of 2016 regarding correspondence they received from an organisation called the Fundraising Regulator (FR).  The FR, which took over from the Fundraising Standards Board in July 2016, has been asking some Circuits to pay a voluntary levy.

All registered charities are being asked to pay a voluntary annual registration fee, currently set at £50. Charities that register with the FR will be eligible to use a badge on marketing materials, stating that they are registered with the new regulator.

The levy amount shown on the invoice is a fixed rate for three years, and is to be paid annually.  All levy payers will automatically be included for registration, without having to pay a separate £50 registration fee. Charities that register with the Fundraising Regulator will be expected to comply with the Code of Fundraising Practice.

The Fundraising Regulator has published changes to the Code of Fundraising Practice, to bring rules into line with the General Data Protection Regulation (GDPR), which comes into force from 25 May 2018.

It was unclear why some Circuits had received invoices from the Fundraising Regulator given that Local Churches and Circuits do not, in general, spend £100,000 or more per annum on generating voluntary income.

The Connexional Team sought clarification from the Fundraising Regulator on why the invoices had been issued and whether it properly understood how Local Churches and Circuits raise income.  The issue was also raised with the Churches Legislation Advisory Service who assisted us in liaising with other affected denominations.

We were therefore pleased when the Fundraising Regulator wrote to the Secretary of the Conference in May 2017 confirming that Methodist Circuits do not, in fact, fall within the levy payment banding as they do not undertake significant fundraising activity. Any invoices sent to Circuits have now been cancelled.

If you have any further queries in relation to this matter, please contact Andrew Thorpe-Apps on 020 7467 5211.