Brave enough to say no 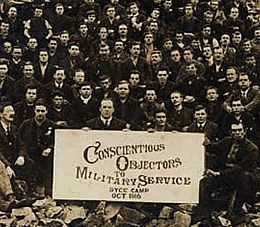 During the First World War, 3,400 registered COs joined the Royal Army Medical Corps, or the Non-Combatant Corps (NCC), dubbed the "No Courage Corps". Some 6,312 were arrested; 5,970 faced a court martial and most were imprisoned. Eighty-one conscientious objectors died; others had mental breakdowns. Many continued to be ostracised after the war, even by their churches. Here are some of their stories.

William Burrell was a Wesleyan local preacher, and could not believe that Christ would take up a gun or bayonet. He wanted to become a missionary, but as a CO was imprisoned in Wormwood Scrubs, Wakefield Prison (where he feared for his sanity), and eventually Dartmoor.

William Done was a Primitive Methodist who worked on the family farm. He became the target of a hate campaign, which began with a white feather sent through the post, and another stuck on the farm gate. Arrested, he was taken to Chester Castle where he was stripped and ordered to put on army uniform. William refused, and was given only a blanket to cover himself. A court martial resulted in a sentence of six years with hard labour, which he served in Wormwood Scrubs, before being transferred to a work camp at Dartmoor.

Victor Murray, later to become the last vice-president of the Primitive Methodist Church in 1932, refused to support the war in any way. He knew this would lead to suffering, but told a hostile military tribunal, "Wise or foolish …I must obey the call of Christ as it comes to me."

Samuel Wakelin became a Methodist because he was a CO. A Sunday School teacher, he was dismissed by the Strict and Particular Baptist Church for his pacifist views. His wife Lily suffered too, being shunned by other church members. Samuel served as a stretcher bearer, and found a home with the Primitive Methodists at Park Lane, Wembley. His son Paul became a CO in the Second World War, serving with the Friends Ambulance Unit. His grandson Mark became president of the Methodist Conference in 2012/2013.