The role and responsibility of a prison chaplain 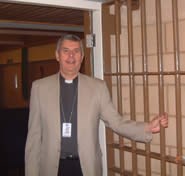 Often prisoners come into prison with many concerns about home and family. They have fears about whether they can survive prison or if there is any future for them when they are eventually released.

Many prisoners come from disadvantaged and debilitating backgrounds. Given the deep needs of many of those being received into prison today, chaplaincy teams are committed to offering support to prisoners throughout their time in custody, and upon release.

Throughout the time a prisoner is in custody the chaplain will offer pastoral care to all who are in need, particularly at times of bereavement or personal distress; these will include prisoners who for various reasons feel vulnerable or suicidal. Chaplains visit all new receptions, usually within 24 hours of their arrival, and also make daily visits to the health-care and segregation units.

Pastoral care is also extended to all members of staff. The work of the prison officer is demanding at every level and chaplains are committed to caring for staff and officers especially during times of stress.

At the heart of the Chaplain's ministry is worship. Chapel services are often well attended, sometimes by men and women who have never previously attended church. The sanctuary of the chapel, combined with the devotion of liturgy and prayer offers a respite from the rigours of prison.

In some ways the chapel stands apart from all other places within the establishment as a place of hope in the midst of despair, of forgiveness in a place of punishment and the restoration of life in a place which, for so many, feels like a dead end. Worship provides an opportunity for men and women to be lifted above their circumstances into the liberating world of faith and love. . 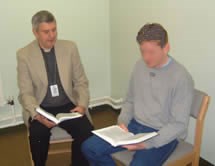 A prison chaplain will frequently be involved in leading groups for Bible study, Discipleship courses and programmes that address offending behaviour. Such groups enable chaplains to meet with prisoners on a regular basis and help nurture them in the faith.

The level of conversation is often more insistent and profound than in many churches, probably because the needs of prisoners are usually more urgent and because they have more time to reflect on issues of life and faith.

David Blunkett once said that the vast majority of offenders are in jail because they have been exploited in one way or another. In these days their exploitation is mostly in relation to the drugs trade but there are many offenders who struggle simply to survive in our highly competitive world. Some are homeless, others rootless and many unemployed. A large number suffer from mental illness and a large number feel that they have no stake in society and owe it nothing. Young offenders, especially those with such a sense of hopelessness, are dangerous both in prison and outside. And their numbers are growing.

Increasingly, offenders are poor; not simply economically but morally, spiritually, culturally, educationally and socially. Terry Waite (former Archbishop of Canterbury's special envoy) when speaking of his long time in solitary confinement said that that the one thing that sustained him during his ordeal was the spiritual and cultural capital that he had acquired over the years. But what of those who have never known life to be good or lovely; who struggle to make sense of their situation; and respond to life in the same brutal way it has dealt with them. They have needs which prison simply cannot meet.

It costs over £500 to keep a person in prison for just one week, which seems like an expensive way of making bad people worse. Many of them will lose their jobs, accommodation or family support as a result of coming into prison,

In his book 'Changing Lenses', Howard Zehr shows that our present system fails to meet the needs of those most impacted by crime. Even the courtroom is just a little unreal - like a stage set where a drama is performed by 'professionals' the lawyers and barristers and judges; and the real people, those whose story it is, the victim, the offender and the community are reduced to spectators and can only contribute as and when instructed. The drama is between two abstractions. No-one gets to tell their story.

Restorative Justice (RJ) offers an alternative to the spiral of blame and retribution. It works from the premise that crimes are to be viewed less as violations against the State and more as violations against people. When seen through the restorative lens, the important question is not "Who is to blame?" but "How can we make things right for all concerned?" How can we make thing right for people who have been seriously violated or for an offender who feels no sense of shame, guilt or responsibility? The criminal justice system centres around making sure that offenders get what they deserve. RJ is more focussed on the needs of victims, offenders and the community. It emphasises the importance of participation by those who have been most impacted by the offence and gives all the opportunity and empowerment to help in the process of making things right

The priority of RJ is to ensure that offenders are made fully aware of the damage they have caused and of their liability to repair that damage. Victims and offenders alike are helped to view each other in a new way. In meeting with offenders and telling their stories, a high percentage (74%) of victims testify to a greater sense of satisfaction than simply going through the courts.

Restorative justice can help repair the emotional and physical harm done by an offence. It is a process whereby parties with a stake in a specific offence collectively resolve how do deal with the aftermath of the offence and its implication for the future. It seeks to balance the concerns of the victim and the community with the need to reintegrate the offender into society. It seeks to assist the recovery of the victim and enable all parties with a stake in the justice process to participate fruitfully in it.

Prison Chaplaincy and Faith groups play a significant role in promoting Restorative Justice with such programmes as:-

Prison Fellowship has developed a Restorative Justice programme called Sycamore Tree which raises victim awareness among offenders and teaches principles of RJ. Surrogate victims talk through the way crime has impacted their lives prompting offenders to offer some form of restitution or reparation. The most moving part of the programme is when offenders recognise the damage they have done and seek reconciliation and healing from those they have harmed.

SORI 'Supporting Offenders through Restoration Inside'.

The 'SORI' programme offers a restorative justice process that brings together the victims of crime, offenders and community members into personal contact. SORI aims to provide satisfaction for victims within a safe and supportive framework. The offender is helped to understand the harm she/he has done through their criminal behaviour; by listening to the experience of victims, they are challenged to take full responsibility and to make real amends.

Circles of Support and Accountability

Circles of Support and Accountability work with sex offenders in an attempt to help them avoid further offending. The idea originated in Canada and was sponsored by the Mennonite Community. In Britain , it has been championed by the Quaker Crime and Community Justice Group and is now being taken up by others, including local Community Chaplaincy projects.

For many offenders prison is a dead end of punishment, exclusion and wasted lives. Restorative Justice, in contrast, is about new beginnings, forgiveness and redeemed lives, and therefore closer to the heart of the Biblical understanding of justice.