Through the rivers of our tears

Though the words of this hymn will be new to most people who attend the funeral for a small child, there is a clarity and openness in the writing that makes it suitable for use with a diverse group of people.

For some, the tune “Buckland” will “ring a bell” from Sunday School or school assembly days. It was used as a setting for the “children’s hymn” by Jane Leeson, “Saviour, teach me, day by day”, as well as “Gracious Spirit, Love divine” (John Stocker).

The editors of Singing the Faith suggest that the name of an individual child may be inserted to replace “this child” in verses 2 and 3, as follows:

For a two-syllable name with stress on the second syllable (e.g. Lorraine):

v.2 “Why Lorraine of all the earth?”
v.3 “Help us bid Lorraine farewell”

For the following options, you may wish to amend verse 3, line 2, to read: “loose our hold upon your life”.

For a two-syllable name with stress on the first syllable (e.g. Michael):

For a three-syllable name with stress on the first syllable (e.g. Josephine):

For a three syllable name with the stress on the second syllable (e.g. Patricia):

This hymn serves as one possible companion piece for Bill Wallace’s other hymn in Singing the Faith – “Why has God forsaken me?”, StF 291 – which interweaves Jesus’ experience of crucifixion and death with our own human experience of grief, loss and dying.

Here, Bill moves in the opposite direction, from our experience of “depression, shock, and fear” at the death of a child, to the example of Jesus: “God you show us in the Cross / you are sharing all our pain…” (v.5). He doesn’t attempt to explain the experience but to acknowledge it; like the psalmists, he asks the hard questions: “Why should life so near to birth / end in such untimely death?” 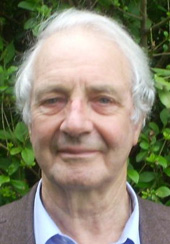 William Livingstone (Bill) Wallace is a retired Methodist minister from Aotearoa/New Zealand, who has spent most of his working life in parish ministry. As well as a writer of hymns, he is a sculptor, artist, designer and speaker on the contextualization of liturgy. (Like Shirley Erena Murray, he contributed to the ground-breaking Asian hymnal Sound the Bamboo (2000).) He has always sought to reach beyond the boundaries of the parish and of his own denomination into ecumenical and interfaith activities. One of his focuses of interest in recent years has been to bridge the gap between traditional Christianity and the scientific world view.

As a young man he began to develop a feeling for liturgy and art, and was disconcerted by the emphasis on expressing God’s word primarily through sermons. “In parish life he found that writing hymns was a more acceptable way of presenting radical thoughts than sermons. They allowed these thoughts to slide into the mind on the back of music.”

Bill’s work has been influenced in later years by Christian mystics such as Hildegard of Bingen and Mester Eckhart. Amongst the many roles he has held, he was the inaugural chair of the New Zealand branch of the interfaith World Conference on Religion and Peace, and chaired Contemporary Hymns N.Z. Ltd. (founded 1966).

He is author of seven published collections of hymns, including The Mystery Telling: Hymns and Songs for the New Millennium (2001: Selah)