After the Armistice, what next?

The Revd Paul King reflects on flawed attempts to make a lasting peace in the aftermath of World War One, and the lessons still to be learned one hundred years on. 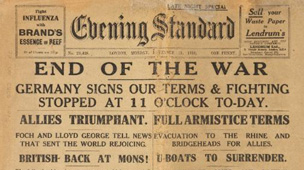 It has been good that the centenary of 11 November 1918 has been marked in the way it has. I have just read of a mother in Barnard Castle, County Durham, who lost five sons and who might have lost a sixth if the vicar’s wife had not written to Queen Mary to ask for his discharge. . . it’s a great narrative.

My own father lost two uncles in WW1. The loss of them hit him hard and turned him into a conscientious objector in WW2. When I turned 18 in 1957, I in turn registered as a C.O., but National Service was phased out and I did not get called to a tribunal. But, working from 1961 to 1964 in Northern Rhodesia, I really was “called up” and declined to serve in the armed forces. Fortunately, the tribunal sent me back to teaching.

See Remembering conscientious objectors and CO100 – another side to war

So I took the widespread and imaginative displays of armistice poppies very seriously: red, white, and also a few purple, recalling the number of animals – mostly horses? – that died in the conflict.

But what about the aftermath of the armistice? World War One was not quite “the war to end all wars”.

Marshall Ferdinand Foch's railway carriage in the Forest of Compiègne following the signing of the armistice. Foch stands second from the right.

It is too easy for the victors of war to plan peace in a way that meets their own ends but fails to take account of longer-term consequences.

It has been appreciated for some time that the Versailles Peace Conference (signed in June 1919) sowed the seeds of the 1939-45 war. Germany was punished very severely, demoralising its people and making them eager for strong leadership – offered by Adolf Hitler and the Third Reich.

For an alternative view, see Dan Snowden’s bite-sized analysis of “ten big myths about WW1” (#9). Have subsequent generations bought in too easily to the idea that the Nazis sold to the German people?

More about the Balfour Declaration (below) on the Encyclopaedia Britannica website.

And then there was the 1917 Balfour Declaration, which was addressing part of the dismantling of the Ottoman Empire, an ally of Germany and Austria. Balfour actually said that, as well as there being a Jewish homeland, the existing population needed to be cared for. It wasn’t. The seeds of the Israeli/Palestinian conflict were sown.

Even before the Balfour Declaration, the 1916 Sykes-Picot agreement between Britain, France and Russia had secretly “settled” boundaries in Asia Minor. As a result of both arrangements, Britain played a big part in the League of Nations Mandate in Palestine and was involved in Iraq and the setting up of Saudi Arabia etc. France took on Syria and Lebanon.

A meeting of the League of Nations

Lessons were learnt in 1945 and steps taken (a) to help Germany recover, and (b) to make the newly established United Nations more effective than The League of Nations had been.

However, substantial veto powers were given to the victorious great powers of Russia, the US, the UK, France and China, which gave us another ineffective world organisation. Yes, the UN has other agencies which have done good – UNICEF, UNWRA, FAO etc. But the Security Council has been as ineffective as the League of Nations on too many occasions.

So. . . after all the deeply moving poppies and remembrance events, we must needs gird our loins for the next Magnum Opus: the building of true and lasting peace.

We shall not forget by Andrew Murphy and Matt Allen extends our thinking about judgment and forgiveness WW1 and the armistice. Other hymns also helpful on occasions other than Remembrance Sunday include Andrew Brown’s Lord, we recall your words and Vince Gilbert’s We shall make peace, to the tune “Finlandia” (all website only).

For more on the League of Nations, the United Nations' own history of the League is a good starting place.