Best of all is God is with us,
God will hold and never fail.
Keep that truth when storms are raging,
God remains though faith is frail.

Best of all is God is with us,
life goes on and needs are met,
God is strongest in our weakness.
Love renews, will not forget.

Best of all is God is with us,
hearts are challenged, strangely warmed,
faith is deepened, courage strengthened,
grace received and hope reformed.

Best of all is God is with us,
in our joy and through our pain,
till that final acclamation:
'life is Christ, and death is gain'.

Best of all is God is with us
as we scale eternal heights,
love grows stronger, undiminished;
earth grows dim by heaven's lights. 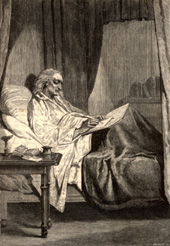 John Wesley on his deathbed © 2016 Thinkstock UK, a division of Getty Images

John Wesley died on Wednesday March 2, 1791, aged 88. During the half century since his conversion experience in Aldersgate Street, he and his brother Charles, together with countless local networks of inspired Methodists, had re-energised the expression of Christian faith in Britain, arguably transforming it quite as radically as other of the nation’s great Church reformers.

While the country-wide character of his pastoral and preaching activity generated enthusiasm and helped raise the Methodist profile, Wesley also had energy enough to write, write as well as to “ride, ride” (as the 1970s Wesley musical had it). The wealth and complexity of his writings have had professional scholars and trainee local preachers alike debating his theology and values ever since. For quite apart from the richness of Wesley’s writing style, he engages in a good deal of vigorous and nuanced argument, much of it responding to the hot theological and social debates of his day and so tricky for the modern reader to get their head around.

And yet in the end his life’s work – all his passion, energy and, at times, sheer grit determination – boiled down to this: as he lay dying, Wesley is said to have raised his arms into the air and, with all his remaining strength, cried out twice, "The best of all is, God is with us”.

I remember a dear, wise gentleman who had spent his life involved in theological education, and who was now absorbing the impact of terminal illness with considerable grace, saying that “faith becomes simpler” as you become older. And perhaps that is how it is when you no longer need to study or preach or argue for a living and have only to respond to life’s mortal question mark. Likewise, our laidback Old Testament professor once reminded us (probably at exam time) of the Sunday School lyric allegedly beloved of the mighty German theologian, Karl Barth: “Jesus loves me, this I know, for the Bible tells me so.”

All these wise and learned teachers and preachers – Mr Wesley included – putting down their books, stepping away from their lecterns and pulpits and smiling at us with the knowledge that even for those with a very great intellect each faith journey finally comes down to a single sentence. And that sentence will have something to do with the word Love. 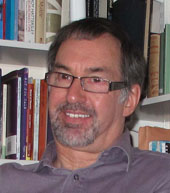 Andrew Pratt: the Bible in one hand, a newspaper in the other

Andrew Pratt’s hymn, too, is deceptively simple. Andrew is known to many for his quickly honed hymn responses to immediate and tough news events. He remembers more than many hymn writers the notion (Barth again) that the Gospel should be preached with the Bible in one hand and the newspaper in another.

Here, however, he leads us back to basics. He doesn’t guide us on an obvious journey, systematically unpacking a theological truth or re-telling a biblical narrative; indeed the verses may appear at first glance almost repetitive.

But the trajectory of this hymn is real enough. Where faith is frail (verse 1), it becomes deepened; where God’s love renews and will not forget us (verse 2), God’s surrounding presence is met with our own response of love, growing strong, undiminished. We’re offered not a pat solution to all the hazards of life but an aspiration. Indeed, Andrew’s words here are as clear a riposte as may be required to the troubling news events that inspire many of his other hymns. “Best of all” becomes an anchor to cling to when the going gets tough, as well as an exclamation of delight when the life of faith feels smooth. “Best of all” is both memory and destination.

As memory, at Aldersgate (to which Andrew alludes: “hearts are challenged, strangely warmed”) it rebooted Wesley’s ministry. The struggle of faith was transformed into the gift of offering practical love, in the form of social care, arguing against slavery, responding to the inequalities of the day.

As destination, it lent Wesley focus in the face of death. Notwithstanding the grief of those left behind, nor denying the deep sense of unfairness that human tragedy can engender, Wesley’s words (and this hymn) insist on God’s presence beyond, surrounding and sometimes despite our experience. It’s the message of Christmas, of Easter; and as a summation of the Methodist motivation towards active discipleship it can hardly be bettered.

Laurence Wareing is editor of Singing the Faith Plus