Dear Lord in heaven, we come as your people (website only)

A hymn for ordination services

Dear Lord in heaven, we come as your people,
made in your image, our weakness you know.
Now may your Spirit both bless and transform us
into the body of Christ here below.

We thank you, Lord, for the gifts of these people,
called as disciples to kneel in this place.
Now may your Spirit both bless and transform them,
ordained Christ’s agents who minister grace.

We thank you, Lord, for these gifts of creation,
made bread and wine, to sustain everyone.
Now may your Spirit both bless and transform them
into the body and blood of your Son.

Bread, wine, these servants, ourselves as your people,
we offer now and receive them once more,
joined in Christ’s body and called in his service,
filled by your Spirit to love and adore. 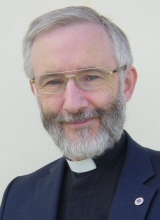 From the hand of past-President, the Revd Ken Howcroft, a hymn intended for used in the service of ordination for presbyters and deacons – one of the highlights of every Methodist Conference. He writes:

"But I began to long for something which recognised that specific calling of some within the general calling of all.

"I was also aware that we sing whilst people are receiving communion at an ordination service, but it is hard to find hymns or songs which tie together the ordination theme with that of communion. Eventually, I sat down and after many false starts began to write my own hymn."