Enthusiastic Methodist hymn-writing partners Paul Wood and Ian Worsfold tell Laurence Wareing about the influences on their faith and music making – and their commitment to sharing both with others.

For Paul Wood and Ian Worsfold, music is fundamental to their involvement with church life. There have been occasions for both of them when, as Ian says, “if we hadn’t been involved in the musical life of the church, we’d have left”. But making music at an early age – with the Boys Brigade (Ian) and in a local village chapel (Paul) – helped form not only their passion for diverse musical styles but also their commitment to Christian faith and leadership. 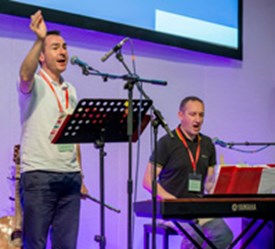 Both now ordained as Methodists ministers, they have become familiar to many for overseeing worship at the Methodist Conference since 2009. They were members of the group responsible for music in Singing the Faith and that 2009 Conference was an early opportunity to begin sharing some of material, new and old, that was being brought together for the publication.

Their commitment to exploring and teaching the hymns of Singing the Faith continues. “The first Advent after the book had been published”, Ian recalls, “I thoroughly enjoyed using it. I could tell the story of Advent in a way I hadn’t before.” Since then, both Ian and Paul have led countless events and services promoting the book’s materials, bringing to the task skills and an enthusiasm developed over many years. They were also the prime movers behind the production of the Singing the Faith piano accompaniment CDs. 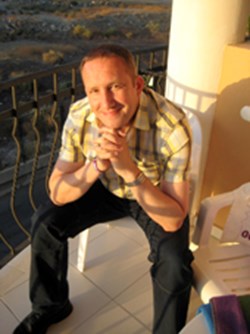 Paul (pictured right) began active involvement with church music as a ten-year-old, when he was invited to play the piano for worship at his local Methodist church in Shirland, the Derbyshire village near Alfreton where he grew up (and remembered in his tune for the Charles Wesley hymn, Author of life divine, StF 572). He says of the encouragement he received that it was a good example of “congregations having to do their bit to be sacrificial… I was rubbish! I played the melody and the members of this small chapel would just sing away. I wasn’t nearly as good as the lady who would step down every other week to let me have this opportunity.”

He speaks of other individuals who encouraged him after he left school with few academic qualifications. One mentor, his local preacher training tutor, Tansy, is remembered with special affection in his tune for the Brian Wren hymn, Jesus on the mountain peak (StF 259). Others encouraged him to think about primary teaching – which he did, specialising in music, which has remained a constant thread in his life. Having later retrained as a minister he still worked actively as the musical director for musical and opera groups in the areas where he served. He runs through an impressive list of show credits, from Annie to Titanic, and reflects that “I’ve got a gift for bringing out the best in singers, and tying together a pit orchestra into a tight unit”: ideal training for enthusing large groups of Methodists with unfamiliar new hymns. 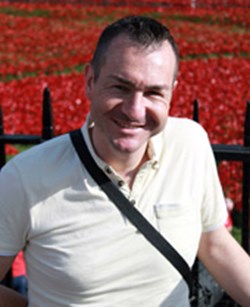 Meanwhile, Ian (pictured left) began developing his worship-leading experience in part from involvement with the Boys Brigade: “I’m as comfortable leading worship in a Big Top setting with a 1000 people, as in smaller, liturgical settings.” A commitment to different styles of music in worship is important to him, though he admits that in his own writing he is drawn more to contemporary idioms. After all, he says, “I’m not going to compete with the guy who can get the word ‘incomprehensibly’ into a hymn” – referring to Charles Wesley’s great Christmas hymn, Let earth and heaven combine (StF 208).

Over the years Ian, now working as a chaplain to students and staff at City University, London, has come to this conclusion: “Methodism is a tradition that explores different styles, but something that pains me is when we put so much traditional material out there that it doesn’t speak to our generation.” (He’s speaking of those rather younger than the “baby boomers” and, in particular, of the “millennials” – those born from the early 1980s onwards.) “Traditional hymnody works well for people already travelling in faith, but as a missional tool I question whether it speaks into the lives of potential new disciples. In circuit life, I’ve never planned an act of worship that didn’t reflect a spread of hymnody.”

While Paul’s own contributions to Singing the Faith include a number of more traditional tunes (“to give older hymns new life”), he, too, is comfortable in a worship band environment (evident in “Higham Lane”, his tune for Ann Philips’ hymn Into a world of dark, StF 387) – but he and Ian also mention Wild Goose (Iona) hymns and Taizé liturgy as important influences.

Since the launch of Singing of Faith in 2011, neither man has written many new hymns – “because we were committed to using the book”.

But perhaps that period of quiet is coming to an end. As we finish talking, Ian fetches me a sheet of paper with hand written words on it. “We were leading a session and inviting those present to write their own hymns. So we felt we’d better write something too…” The result was You call us to the wilderness, an empty, barren land, a thoughtful acknowledgement of how we can draw on our own “wilderness” periods in order to help others through theirs. It is perhaps one example of Paul and Ian’s guiding belief that, just as they’ve been encouraged in their faith over the years, in all its ups and downs, their task now is to do the same for others – with music as a central means of helping that to happen.

Find out more about Paul and Ian’s hymns: