For all he came, for all he lived (website only)

For every colour, race or creed,
For every state of mind,
For all of good intent, or ill,
For all our human kind.

Our every weakness shows his strength,
his power for all made free;
to know of capture by his love
is perfect liberty.

For all the world Christ Jesus lives,
For strangers and for friends;
‘Go into all the world’ – and own
the Life that never ends.

Words: © 2003 Beverley Jones (CCLI no. 7156871) (The original five-verse version of this hymn is registered with CCLI using this number.)

Suggested tune: University (StF 438). Beverley Jones adds that Abridge (StF 436i & 507) makes for “a satisfactory alternative, and has about the right combination of positivity with sobriety”. 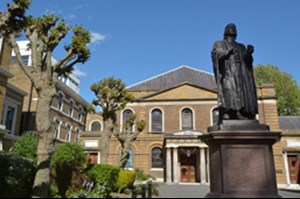 This hymn is imbued with the spirit of the Wesleys. It expands on teachings associated with John Wesley (left) and echoes some of Charles Wesley’s most impassioned verse writing:

For all my Lord was crucified,
for all, for all my Saviour died.

Those lines conclude Wesley’s hymn Let earth and heaven agree (StF 358), which sits in the Singing the Faith section headed Jesus Christ the Saviour: Lord of all (StF 341 – 368). Both hymn and heading reflect John Wesley’s emphasis on God’s grace, which was drawn from his understanding of Arminianism; a contrast to the Calvinist-inspired idea that only a select few are destined for God’s salvation.*

Openness to the possibilities of God’s goodness underpins Beverley’s hymn as a whole but the four lines of v.3 in particular offer a free interpretation of what are sometimes known as Wesley’s “Four Alls”:

Wesley wrote that “God willeth all men to be saved, by speaking the truth in love.” Perhaps implicit in this belief is a bias towards inclusion, which Beverley acknowledges can sometimes be a tough ask:

“In the year I wrote this, I had been elected to the local borough council following a spirited campaign in which we were faced with candidates from the far right pursuing highly devious and frankly nasty strategies to make their point. Writing verse 2 was a salutary experience, as where it states categorically (Christ came) ‘for every state of mind’ and ‘for all of good intent, or ill’, I was painfully aware I was speaking to myself just as much as to any reader.”

The hymn’s final verse alludes to the need to “spread the word” – a theme that Beverley unpacks further in her hymn We would believe: Lord, help our unbelieving (website only). To do that we need not only to “own the Life that never ends” – in the sense of admitting this Christian truth – but own it also in the sense of claiming or possessing that truth as a transforming reality.

*As starting places for exploring what Arminianism meant for the Wesley brothers, try the short summary in the online Encyclopaedia Britannica and this brief introduction to Wesleyan theology, which links to further comments about how "all can be saved". 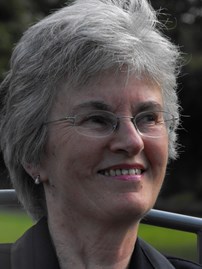 Beverley Jones was born and grew up in New Zealand, emigrating to the UK in 1992. A primary schoolteacher and arts administrator by profession, her UK church involvement has included regular playing of organ and piano in the Clitheroe Circuit, roles at circuit and district level, and a two-year term on Methodist Council. Between 2003 and 2011, she was an elected borough councillor and was borough mayor in 2009-10.

Beverley has been writing poetry and hymns since the 1980s, but describes her output as “spasmodic”.  Her poem “Signposts” was placed first in the 2015 Methodist Recorder Poetry competition.