Gifts for all – the worship music of Barbara Honeyball Young

Barbara Honeyball Young offers something a little different, not only to Singing the Faith Plus but, more importantly, to the possibilities of our worship experience. 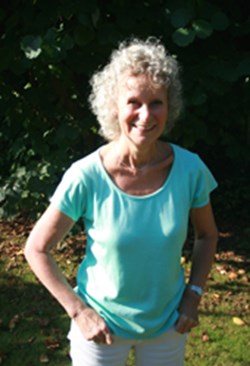 Since the early days of Singing the Faith Plus, Barbara, a composer and choir leader, has been making quiet contributions to StF+ and nearly all of these have taken the form of shorter sung responses that can be interwoven with prayers or sung in response to readings. Some of them include a little simple harmony but you don’t need a choir to sing them – though it is for a choir that many of them of were originally written.

Confirmed at age nine into the Church of England, Barbara’s early experiences of choir singing included the reflective polyphony of Byrd and Palestrina, and she has sung in choral societies and chamber choirs. However, it is thoughtful simplicity that marks her writing, much of which has been written with children in mind.

When she retired in 2008 from being a specialist music teacher in primary schools, she found herself missing her work with children, so founded a children’s choir at her local church, St Mary’s in Welwyn. (It was her husband Nick, a Methodist minister in the St Albans and Welwyn circuit, who suggested the choir’s punning name, “Welwyn Tune”!)

In order to give her choir some occasional involvement in worship, Barbara began to write responses for them. “They would be positioned in the middle of the church alongside the reader of the prayers, and would sing from there.” Children, literally, in the heart of worship. As a variant, for Come, Holy Spirit, come she added a part for the church’s hand bell ringers – another group that didn’t often get a chance to be involved in a service. These responses, she has been told, really help members of the congregation enter a time of focussed prayer.

Moreover, as a gift to services in which many of us sit, for the most part, “on the receiving end” of readings, prayers and sermons, Barbara’s well-crafted, small-scale pieces of sung liturgy offer accessible opportunities for fuller participation. Nor is a choir required to lead them. As with many of John Bell and Graeme Maule’s shorter songs and responses, a little time teaching the response before a service, or a primed soloist to lead the singing, will quickly have words and melody being sung confidently. In any case, responses, by their very nature, are for repeating – and how better to pick up a piece than through repetition?

Inspired to write, for the most part, in response to requests and particular needs, Barbara’s output has included songs for the weddings of her family and friends, and the gift of an annual carol for her previous church. “It gives me such a lift to write – I do feel inspired by the Holy Spirit, often for no apparent reason.

See also on Singing the Faith Plus, Barbara's Carol for Peace – a questioning, thought-provoking contemporary carol for Advent and Christmas.

Discover all of Barbara’s contributions to StF+ here.