It was a new beginning on the day the Spirit came.
The house was filled with roaring wind and heads were touched by flame.
Their lips were blessed with languages that all could understand
and Peter led the charge into this new uncharted land.

It was a revelation when the doors were opened wide
and all could see what happened to the ones who were inside.
“These men are plainly very drunk, at only nine-o-clock.
It’s surely very clear they’ve had a monumental shock.”

It was a new translation when the Spirit led their speech
and Peter stood in front of them and then began to preach.
The people were amazed because they understood each word
and, what is more, they acted on the message that they heard.

It was a new beginning, but the story carries on,
as people still find inspiration, though the years have gone.
For Pentecost is here and now, the Spirit still holds sway.
and helps us to translate God’s word and challenge for today.

Words: Marjorie Dobson © 2019 Stainer & Bell Ltd, London, England, www.stainer.co.uk. Please include any reproduction for local church use on your CCL Licence returns. All wider and any commercial use requires prior application to Stainer & Bell Ltd.

Taking as its inspiration both the story of Pentecost (Acts 2: 1-20) and a popular English folk song melody, this is a hymn to throw yourself into without worrying too much. It is probably best suited to being sung either unaccompanied or with a lively fiddle, folk group or piano accompaniment.

To ensure an exact fit of words to tune (especially if your singers are not wholly familiar with the tune), it is true that you have to scan quite far ahead to make sure how everything works out. One option may be to organise a cantor/response style song in which the congregation just sings the last line of each verse (in an appropriately rowdy and enthusiastic fashion). Whatever you do, don’t allow the singing to lose its gaiety – though, as Marjorie Dobson comments, the tune is so infectious, that is unlikely to happen!

“This hymn was written during a hymn writing weekend and then sung without preparation, but with great gusto, by those present. They seemed to have no difficulty in fitting the words in. Admittedly we had an excellent pianist accompanied by a fiddle played by a folk musician, but the second time it was used was in my Pentecost service at church with a congregation of around sixty and an average age of around 78. Their only preparation for the singing was the printing of the words on their service sheet, including a note of the name of the tune.”

Perhaps we don’t have enough sheer fun as we might when we’re singing in worship. Marjorie Dobson’s Pentecost hymn puts that right! This is a hymn that values the ability to re-tell a biblical story in sung form without imposing on it a weight of additional theological reflection. Marjorie says:

“I’ve always thought of Pentecost as a get-up-and-get-out-there day, so this tune ('The Lincolnshire Poacher') seemed to be a natural one to use to express that feeling. It’s fun to sing and I’ve used it with people of different ages and they all seemed to be prepared to go along with the spirit of the piece – exactly what is needed for Pentecost!”

If we are honest and acknowledge that each successive generation is losing an ever growing number of the Christian stories from its shared knowledge and vocabulary, then hymns such as this are more than helpful – they are a gift and a reminder. They are also increasingly rare, at least in Singing the Faith.

A number of other hymns by Marjorie Dobson have also re-told stories from the New Testament as well as the stories Jesus told in the first place. This approach to hymn-making is a subject that we have touched on in our series of four articles on hymns about the grown-up Jesus. Marjorie’s own contributions to this “genre” include: 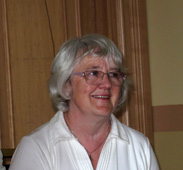 Marjorie Dobson is Methodist local preacher as well as a hymn writer. She was a member of the Music Resources group that sifted through many hundreds of hymn texts to select those appropriate for Singing the Faith.