Our physical experiences as human beings are integral to Anna Briggs' imagery and writing. It also turns out that there is a real connection between Anna Briggs' commitment to hymn writing and her skill as a knitter.

[Read Part 1 of this article]

Anna Briggs is not widely represented in denominational hymn books. However, many of her hymns and prayers appear in occasional publications and anthologies (e.g. Celebrating Women: the new edition pub. SPCK, London: 1995). They are notable for their challenging engagement with difficult and painful issues. “You called us all to you” was written in 1988 for a friend who died of AIDS. In it, Anna captures a sense of faith’s fragility and our nervousness about following Jesus’ example:

You called us all to you
And like moths round a flame,
How we timidly flew
While we first learned your name;
We hung back and trembled,
At the pain we might share;
But found, once assembled,
We were safe in your care.

Continually, Anna confronts us with our physicality as human beings and with the unwanted shocks and burns of daily life. “You gave us to each other, Lord” powerfully captures the reality of domestic violence and abuse (“lashing tongue and thrusting fist, / And touch unasked, un-named”) and sets that against a prayer: “Stretch out your nail-marked hands in love, / Make violence to cease. . . Restore the homes deprived of joy, / Deliver those in pain. . .”

And if Jesus’ physical experience is made real in this text, so is that of his mother Mary in “Stay my child”:

Stay my child, my body sharing,
girlhood’s peace from me is torn;
well I know a mother’s fearing,
hope miscarried, joy stillborn.

As one writer puts it: “Briggs captures the thoughts of Mary, who not only ponders in her heart but senses in her body”.

What is also true of this and her other hymns is that Anna always writes out of personal experience, allowing her emotional response – grief, anger, horror – to have a voice. “Stay my child”, for example, reflects Anna’s own pain at losing her son in a road crash. His death occurred just six months after the death of her husband from cancer. These and other difficult personal experiences have convinced Anna that, as Christians, we have to speak and sing about the harsh realities that confront all human individuals.

She recalls her shocked response as one priest preached about the unquestioned beauties of motherhood embodied in the life of Mary, the mother of Jesus. “I found myself shaking – with two women alongside me in the choir holding me up – and I wanted to ask about people without babies, people who have a child as the result of rape or coercion, and people who have had miscarriages or stillbirths. And there are no guarantees, even now, when a woman goes into labour.” 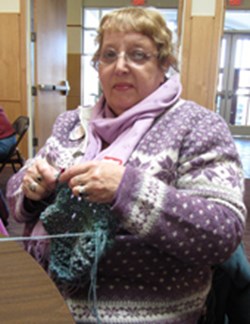 Knitting, as well as hymn writing, becomes an act of pastoral ministry for Anna Briggs.

During her time in Liverpool, where she was connected with Somewhere Else, the Methodist “bread church” founded by Barbara Glasson, Anna also expressed her Christian concern for those in need through one of her other passions – knitting. She set up a number of local Knit and Natter groups that worked in conjunction with other charities to deliver hats, gloves and other knitwear to people in Kosovo. And through her  advocacy of Shawl Ministry she has made and given many shawls to people who have been bereaved, those having difficult surgery or treatment, or whose relatives are ill or dying, as well as to new mothers and babies.

Anna’s knitting is a ministry that, like her hymns, reflects her desire for Christians to be where people are in every moment of their lives, however hard. It’s a desire summed up perhaps in a hymn set to the traditional South African song tune, “Mayenziwe” (StF 760): “You knit us together, all shades and hue”, she writes: “the gold of our joy and our sorrow’s blue. . .”

You knit us together, to serve and share.
The wounds that we bind show your healing care.
So bind us together, through time and through space,
to grow into your garment of grace,
to wrap the world in love’s Embrace.