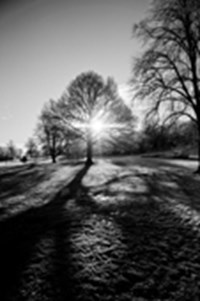 It is the most absurd of carols,
“In the bleak midwinter” –
more so even than our acceptance
of the cosy, tranquil stable
and a baby that never cries.

“Snow had fallen, snow on snow”. No.
Snow on Christmas cards, may be,
the perfect backdrop,
white bedding
in which to plant the Christmas tree.

But in a little town called Bethlehem,
that desert city? Hardly.
And if there was – it’s not impossible –
there would have been, for pity’s sake,
no shepherds with their flocks by night.
The sheep, less silly than we think, would be by now
far removed from dangerous, rocky hillsides.

And who, we might well ask,
would the angels have sung to then?

What inconsistencies we play with,
what pictures we return to,
unquestioned, like the rituals
of cake, pudding and a glass of something special for Santa.

And yet she knew something of the world, Christina Georgina Rossetti,
where frosty wind made moan
and earth stood hard as iron, water like a stone. 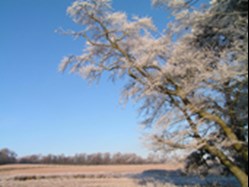 Only now, as I walk the dog
(how mundane is that?)
on tough, ploughed and unforgiving fields,
and not on pavements
laid to make our walking easier
and hide the earth below,
do I understand the truth of Ms Rossetti’s poetry –

of a world, “hard as iron”,
into which Christ came
like Love
(as she also wrote)
to thaw, to melt, to heal,
to question who we are,
a plea, a gift, a sign.