Hymn writer Ally Barrett reflects on the pros and cons of writing hymns to sing with well-known tunes.

Many of the hymns and songs submitted for consideration by Singing the Faith Plus are written with specific tunes in mind. Often these are very familiar tunes – Bunessan is a popular choice, for example (though a tricky one, with its unusual metre). In the June 2018 edition of Church Music Quarterly, the Revd Ally Barrett wrote about her own experience using existing tunes for new words. We are grateful to Church Music Quarterly for permission to reproduce extracts of that article here.

“What does it mean for a new set of words to ‘borrow’ an old and familiar tune? Is this simply putting new wine into an old wineskin and perhaps ruining both? Or can a writer legitimately try to capitalize on an old tune’s popularity and singability to lend their new words some added credibility?

“Dear Lord and Father of mankind has frequently been voted as the nation’s favourite hymn. Parry’s tune, Repton, bears some significant responsibility for this. It is a yearning tune. . . Because of its belovedness, and also because it is a hymn about which I have good childhood memories, I chose to borrow its tune when I was asked to write a hymn suitable for a parish commemoration serve at All Souls’ Tide.

“It’s the kind of service to which a church invites all the families of those whose funerals have taken place over the past year, so you probably want hymns that will wrap the congregation in a warm blanket of familiarity, while offering a set of words that is bespoke for the occasion. This is what I hoped for in borrowing Parry’s music. 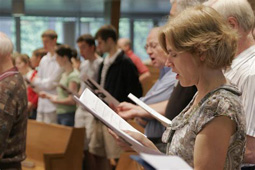 “We remember what we sing far better than what we say, and better still than what we only hear. Rhyme, rhythm, meter and music all create a significant level of credibility and make a hymn more memorable. This brings its own set of responsibilities. When we dare to put pen to paper to write a hymn, we do so in fear and trembling lest we write a lie that will be sung as truth.

“A hymn is inflicted on a congregation. It sells that congregation not only a theology but a sensibility that will borrow a ring of truth from the way it scans and slips easily off the tongue, aided and abetted by its tune and harmony. All these lend it a credibility that it would not otherwise have. As a hymn writer, this occasionally keeps me up at night.

“Every tune carries with it a set of culturally accrued meanings, and we ignore those meanings at our peril. Consider what it means to write a set of words to, say, the Dambusters march. The particular cultural resonance of such a tune will undoubtedly affect how we experience any new lyrics and may also limit what sort of words are deemed appropriate to sing to it.

“What feelings are evoked by tunes usually used in Christmas carols? Or for hymns often used at funerals? Or for hymns that are primarily known through their association with secular events such as sporting occasions? Jerusalem and Eventide (Abide with me) spring to mind. Are those resonances helpful, or do they conflict with what the new lyrics are trying to do? [See, for example,  Andrew Pratt's A bloodied child ("The boy in the ambulance") ED.]

“I would urge anyone thinking of penning new words to old tunes to reflect deeply and creatively on the capacity of a hymn tune to communicate more than its notes on the page would suggest, and to treat this phenomenon not as a reason to reject the practice, but as an opportunity to let what is new enter into creative conversation with what has gone before.” 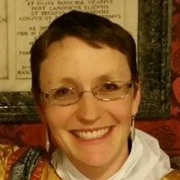 The Revd Ally Barrett, Chaplain of St Catharine's College, Cambridge, has written a substantial number of hymns in response to requests and commissions. They include May this place be one of nurture, available on StF+ and originally written for the commissioning of safeguarding officers in a service of worship.