Out of the depths I cry to you, O Lord (website only)

Out of the depths I cry to you, O Lord;
make, Lord, your ears attentive to my call.
Sorrow and fear overwhelm and engulf me:
Lord, in your mercy, hear my cry.

Should you, O Lord, keep watch for every wrong,
who then, O Lord, could raise their head in song?
Yet in your grace is forgiveness and freedom;
help me revere and fear your name.

May we, your people, joined in one accord,
out from the depths renew our hope, O Lord.
May we in you find redemption and mercy:
Lord, hear our cry, our deepest song.

Written for the tune "Gresford" ("the miners' hymn"). Download as a PDF, with tune.
A midi file of the tune is available on David Lee’s website, together with detailed notes on the paraphrase and its resonance with the experience of miners working underground.

Consider reading another version of Psalm 130 (e.g. in the responsive version included at StF 832) before singing David’s paraphrase. Allow a time of silent reflection between the reading and the singing. Alternatively, precede the singing of David’s hymn with a reading of one or more verses of Martin Luther’s paraphrase at StF 433. You may wish to explore and consider why this psalm held such an important place in the thinking and singing of the great reformer. (See “More information”, StF 433.) 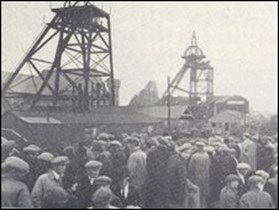 A crowd waits at the colliery following the disaster

The Gresford mining disaster occurred in North Wales in 1934. Two hundred and sixty six people were killed, including children as young as twelve. Only eleven bodies were recovered.

Two years later, a Durham miner, Robert Saint, wrote a solemn, reflective tune "Gresford" to commemorate the event. This was rapidly picked up across the mining communities of Britain and is still played frequently throughout mining communities, including David Lee’s own adopted home area of County Durham.

"There has never been a decent set of words to this tune," writes David, "even though Gresford is known colloquially as 'the Miners' Hymn'. So in 2011 I wrote a hymn text to it based, appropriately, on Psalm 130. It attempts to be faithful to the text of the original psalm, faithful to the industrial context behind the writing of the tune and faithful to the communities who continue to own the tune and to treasure it."

David says that "'out of the depths...' is perhaps one of the most well-known opening lines of a psalm. It immediately resonates with those whose vocation was, and is, in the dangerous industry of coal extraction.” He notes that "the original psalm spends a long time talking about waiting, and waiting and still waiting. So the whole of verse three just spends time, in an already slow, solemn tune, simply waiting... and waiting..." The verse concludes with the wait through the "bleakest, darkest hours": "the imagination is taken into the desperate situation of those who are trapped" and the verse’s final line echoes the saying, "the darkest hour is just before dawn".

More about the tune Gresford can be found in The Pitmen’s Requiem by Peter Crookston. BBC Radio 4 also broadcast an episode of its series Soul Music devoted to Gresford: the miners' hymn.