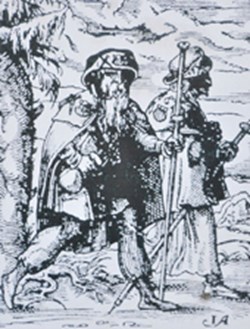 Pay heed to the people you meet on the journey,
be ready to learn from each traveller's tale.
Then open the door and remember the promise:
Christ's welcome for all, and a love that won't fail.

1. Seek grace that sees past every glib preconception,
that takes a new risk as a host or a guest;
there's Simon the Tanner, or bold Ananias:
grace seeks out the worst and discovers the best.

2. Step up to the challenge and shoulder the burden,
and treat everyone with the dignity due;
like Lydia's lodgers and Jason the landlord,
your choice has a consequence: carry it through!

3. And Jesus himself made his journey among us,
transforming the earth that he travelled and trod;
and here is the call now to all who will follow:
live justly, love mercy, walk humbly with God!

Suggested tunes: Written for the tune ‘The Bard of Armagh’, also familiar as ‘The Streets of Loredo’ (versions of both songs widely available on YouTube).

Alternative tunes already in Methodist hymn books: ‘The road and the miles to Dundee’ (StF 604), which has a similar traditional/folk feel; and the more formal sounding ‘St Catherine’s Court’ (Hymns & Psalms 660).

It may be felt appropriate in local circumstances to omit the chorus following verses 1 and 2, so using the chorus to top and tail the hymn.

Dominic’s hymn was written to help his congregation reflect on a number of biblical stories from the book of Acts, each about hospitality offered (sometimes at personal risk) or engagement with strangers ‘met on the journey’. It may be helpful to read or summarise some of these stories to accompany the singing of this hymn. (For details, see below.)

The theme that inspired the hymn was: ‘Shelter for the traveller’, something that pilgrims - such as those on the Camino de Santiago (image above) - understand as a necessity. It may therefore be a useful hymn when considering times of travel (during the holiday seasons, for example) or when considering those who have been forced to travel, such as refugees and asylum seekers. The text also connects with subject headings in Singing the Faith itself e.g. The Ministry of Jesus Christ (esp. v.3) and Our Journey with God. The verses from Micah (Micah 6: 6-8) have been developed in the Justice and Peace section of the hymn book, and this hymn, with its recurring refrain (‘open the door and remember the promise: Christ's welcome for all’) may usefully be considered a justice hymn.

‘Pay heed to the people’ is unusual in Singing the Faith in referring to a number of lesser-known but significant individuals in the early Church communities - members of the 'supporting cast', as it were, in stories dominated by St Paul and the first apostles. They are each named in the book of Acts, mainly in relation to the travels of St Paul but also (Simon the Tanner) in connection with the developing ministry of St Peter.

Dominic Grant says that he wrote the hymn for use at his church on a Sunday when worship had been shaped around the theme ‘Shelter for the Traveller’. Four passages from Acts were used to illustrate the theme and are each referenced in the hymn. 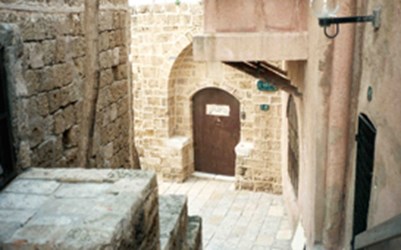 It is at Simon’s house (image right) that Peter is challenged to start breaking down the barriers between Jew and Gentile. This is a message that he begins to perceive as the result of a strange dream he has while in a prayer-inspired trance on the roof of Simon’s house.

Later, he is visited here by representatives of Cornelius, a Gentile centurion and “a good and religious man”. Peter is persuaded to go and meet with Cornelius even though, as Peter says, “a Jew is forbidden by his religion to visit or associate with anyone of another race”. (10: 28).

Peter comes to understand that Christ’s gospel is intended for all people and that in “every nation those who are god-fearing and do what is right are acceptable to him”. (10: 34-5) 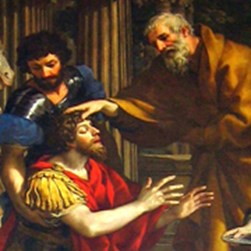 ‘Bold’ is a good description for Ananias. He is commissioned by God to go and meet the killer of Christians, Saul of Tarsus. What he finds is a man who has been blinded in a vision of Jesus while on the road to Damascus. (Image left.)  Startlingly, Ananias is told by God that Saul is now “an instrument whom I have chosen to bring my name before Gentiles and kings and before the people of Israel”.

Like Peter, Ananias discovers God at work in the most unexpected people, and is challenged to embrace those unlike himself. 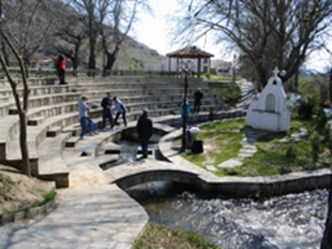 Lydia is a rich dealer in rare and highly prized purple cloth (the sort worn on the togas of Emperors and triumphant generals). She, like Cornelius, was most likely a gentile and also an intently religious person, choosing to meet with the small Jewish community on the edge of Philippi.

Converted to the Christian gospel, Lydia shows hospitality to Paul who, like Peter, has been learning that God’s love is for all. In this act, business woman and evangelist together model the offering and accepting of hospitality between people from very different backgrounds. The image left is a Greek Orthodox chapel in Philippi, perhaps where St Paul is said to have baptized Lydia. 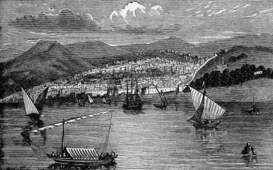 Finally, Dominic’s hymn makes reference to Jason – and reminds us that ‘sheltering the traveller’ is not always without risk. Jason is one of a small community of Christians living in the important seaport of Thessalonica. (Image left.)

Paul and Silas arrive and their teaching and discussions in the synagogue creates anger within the Jewish community, which sees some of its own converting to Christianity. A mob comes after Paul and Silas and when it can’t track them down Jason and other Christians are arrested instead. Eventually, they are released on bail and Paul and Silas are smuggled out of harm’s way.

It is a story that can still challenge us to stand by our beliefs. As Dominic puts it: “your choice has a consequence: carry it through!”